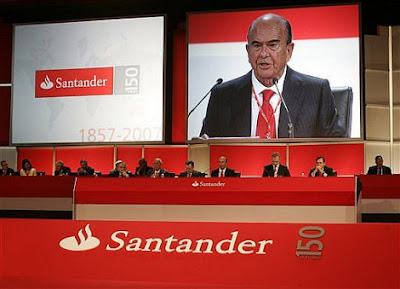 I don’t like to tempt fate but living in Spain I feel more of an observer of the world financial crisis than a participant in it.

I click the remote control of my TV to get the latest from Fox, Sky, BBC World and CNN as the turkeys in the US Congress appear to have voted for Christmas ... or maybe they have voted against it. The truth is nobody knows.

True the Spanish economy has been hit, the construction industry is in a bad way and it is much harder to get credit. However to date at least we haven’t seen the failure of banks that now seem to be a regular occurrence in the USA and Britain.

On Monday I penned a report on how Spain’s largest bank, Santander, had stepped in to purchase the Bradford and Bingley’s savings and branch business. This section of the B&B has £20 billion in deposits with 2.7 million customers. It will be bought for £612 million by Santander and is expected to be absorbed into the bank’s established Abbey business.

Banco Santander had initially been in talks with the troubled mortgage lender to take over its entire business. That quickly became a no-go after the Spanish bank discovered the true state of the B&B’s mortgage business. The mortgage book will now pass to the British Government which will add it to the home loans it inherited from Northern Rock.

These are strange times indeed when a Spanish bank is seen to be the saviour of so many British High Street names.

On Monday of last week the chairman of the Banco Santander, Emilio Botin told shareholders: “Faced with this difficult domestic and international operating environment, we are better placed than our competitors.”

He stressed Santander’s strong balance sheet and potential for repeat profits from its retail banking business, “which have allowed us to post consistent earnings growth.” He added: “We are really in a magnificent position compared with our competitors.”

That would certainly appear to be so. I think bankers used to pride themselves that their word was their bond. Let us hope for the sake of both Spain and Britain that is true of Don Emilio Botin.
Posted by SANCHO at 11:04 AM No comments: