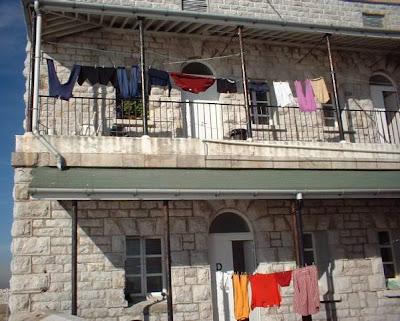 The visitor to Gibraltar will be struck by the large number of Moroccans on the Rock. Largely these are men. Moroccan workers were recruited to replace Spaniards after Franco closed the border in 1969. They are still there to this day.

For years they have lived in pitiable conditions with no rights a situation no doubt based on the belief that people from a third world country were third class.

The Moroccan Workers Association has represented its fellow nationals in recent years but now the TGWU/Unite union has stepped in to battle on their behalf.

Gibraltar’s Employment Minister Luis Montiel says that the conditions of the Moroccans on the Rock are better than they were in 1996. Sadly that isn’t saying much.

The TGWU/Unite district officer, Charlie Sisarello, stated: “Moroccan workers are imprisoned in Gibraltar and what Minister Montiel is saying is that they are prisoners with better conditions than in 1996.”

Only the Moroccans directly employed on the Rock are allowed to live there. Therefore they are separated from their families who are not allowed to visit them.

In Gibraltar they largely live in a government hostel. Sisarello describes it as being “unfit for human habitation”. I have seen these facilities and his description is spot on.

The union leader went on to describe the plight of the Moroccans: “The fact remains that they are stranded in Gibraltar and cannot cross the frontier to catch a ferry in Algeciras to see their families or attend to a family emergency. They depend on a highly unreliable ferry service. The situation can be described as nothing short of scandalous.”

It is sad and tragic that in 2009 people are still treated as being an underclass – even more so as they are vital to the operation of many businesses and services on the Rock. Sad and tragic may be – but not unbelievable!
Posted by SANCHO at 9:11 AM

While I agree that the conditions and human rights that the Moroccan community have had to endure for far too long in Gibraltar, are shocking... there are also some mitigating circumstances and many reasons why this has been a very difficult problem for Gibraltar authorities to have to deal with.

However, it's a bit rich for the Unions to now start getting on their high horse about this! One could ask where have they been for the last forty years? The Moroccan community has received little or no support to shout about from their quarter! It's only now, that a International Union and Human rights organisation is looking at highlighting this issue... that it's stirred the local unions into paying some lip service to this!

Gibraltar is one of the world's most over populated territories and housing has always been a huge problem for all who live on the Rock.

Having said that... there is no question there is much that could and should have been done to ease the plight of Moroccans working in Gibraltar and successive governments (unpressured by the unions) have fallen badly by the wayside in not making proper provision... and as for human rights... don't get me started on that one!

I do believe there are now moves afoot that will be hopefully addressing these issues... but it is a difficult one for Gibraltar.

Sancho... you've actually beaten me to the gun on this issue... as I have been planning a post or two on this myself, (I have spoken about this in the past elsewhere)... but as I say, I am led to believe there are developments afoot! Nevertheless... well done for highlighting this... we need to shake this tree vigorously... especially on their human rights!

Thanks for highlighting this issue. Perhaps the more publicity the deplorable situation the Moroccan workers endure in Gibraltar receives, the less easy it will be for the Gibraltar government to cover it up behind the smokescreen of glitz and glamour at Ocean Village and the International Boat Show.