FIESTA NACIONAL OR A LOAD OF BULL? 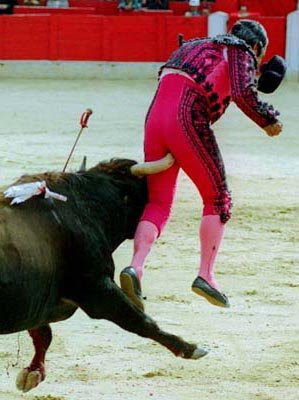 The Catalan parliament recently voted to ban bull fighting in the region. However the decision was as much based on politics and separatism as it was on any concern for the rights of animals and cruelty towards them.

The reaction in the rest of Spain has been to staunchly defend the ‘fiesta nacional’. Yet whilst it might be identified as “national” to the exclusion of Cataluña the true home of the bull fight and the industry that surrounds it is in Andalucía.

Indeed last week the mayor of Ronda, Antonio Marín, asked the Andalucía government to deem the town the centre of studies and investigation of “Tauromaquia”. Ronda’s bullring was founded in 1785 – the oldest in Spain – and the mayor wants his town to have the role to defend “the traditions of Andalucía”.

Hence the decision of Los Verdes to demand that the Andalucía government bans bullfighting will send shock waves through the world of the corrida.

So what are Los Verdes arguments? Mario Ortega, Los Verdes spokesperson, says the ‘fiesta nacional’ would not survive in Andalucía if it did not receive subventions from the public authorities. He claims bullfighting receives 13 million euros from town halls, 12 million from the regional government, nine million from the various provinces and four million euros from RTVA – the Andalucía broadcaster.

In terms of the environment many argue that without the bull fights the “dehesas” on which the animals are raised would simply cease to exist. Not so says Ortega “only nine per cent of the ‘dehesa’ breed bulls that are for the ‘lidia’” or fighting bulls “and less than five per cent of the bulls that are breed in these spaces go to the plaza de toros”. He claims the majority of farms breed livestock for meat products.

Although this is a Los Verdes initiative the party is appealing to all supporters of the left in Andalucía not to defend the ‘fiesta nacional’ as part of their identity or “the traditions of Andalucía” as Ronda’s mayor would describe it.

It also says that 80 per cent of young people want the “toros” to be abolished... but if that is the case the young may have to wait to they are much older before their aspiration becomes a reality.
Posted by SANCHO at 6:29 PM

There seems to be an automatic assumption that if something is "traditional" then it is good.
In Spain this arguement is used to defend bull fighting and flinging live donkeys from church towers.
It was once traditional for Romans to throw Christians to the lions and for criminals to fight to the death in the arena.Roman traditions have matured since then and it's about time Spain grew up.
Animal welfare laws in Spain are lax in relation to the rest of Europe.I believe that the bull fighting industry lobbies fiercely against any legislation that may affect them.This is a multi million euro industry in which the participants are defending their incomes rather than their traditions.In this day and age I find it hard to believe that educated civilised people believe that the torture and killing of any animal is art or entertainment.

"Definitely a load of bullshit!!"

Here are two considerations by another blogger, a friend of Sancho's. The first is about tradition: http://alexanderbewick.blogspot.com/2010/07/tradition-right-or-wrong-but-why.html

The second is about bullfighting:
http://alexanderbewick.blogspot.com/2010/03/load-of-bull.html

Alexander Bewick is only an occasional writer, but I share these two opinions.