HE DIED LEANING AGAINST THE WALL 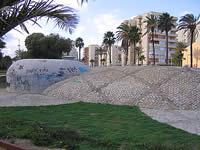 I have written a number of articles about the desperate plight of the homeless in La Línea. The town hall is bankrupt and cannot pay its workers on time so what hope is there for those with nothing?

I have also written about Mary Finlay who lives in San Roque. She was so moved by the appalling situation in the border town that each Wednesday she and a team take hot drinks, food and clothing to these people sheltered in doorways, the old bunkers and abandoned buildings.

When I first wrote about her work and gave her contact details in various local publications a number of readers contacted Mary to offer their help. No real surprise there because that is what by nature good people do.

This weekend the tragic news of the death of Galeote reached me. He was one of the homeless of La Línea who died leaning against a wall outside the day centre in broad daylight.

Mary told me: “Poor man he was the first that we ever came across the first night we started, so pleasant, eloquent, and extremely grateful for contact.

After a few weeks he said that he had decided to try and gain admittance to a centre because not only was he crippled with arthritis after so many winters out of doors he felt completely isolated from people and was in need of that warmth which we hopefully were showing him. He was taking tablets prescribed by the doctor to stop drinking to enable him to gain admittance.

“A few weeks ago he had to be taken by the volunteers to the emergency department of La Línea hospital because he looked as if he was dying of pneumonia, he had a few days respite and then was put out on the street again, swigging back medicine for his cough but he was never well again; apparently it wasn’t pneumonia but the effects of very heavy heroin addiction.

“On Wednesday, he was standing outside the day centre and after asking after him, he told one of the centre’s users that he didn't feel well, but not to call an ambulance, next thing she knew a lot of foamy saliva was coming out of his mouth. She rushed in to say that poor Galeote was dying but they thought it was the effect of tablets and nothing to worry about. But that was how it happened, he was actually standing leaning against the wall when he died.”

Mary went on to add: “A few weeks ago he completely shaved his head and beard off, I think he knew he wasn’t going to be around much longer.”

(Photograph shows one of La Línea’s WWII bunkers where the homeless shelter)
Posted by SANCHO at 10:49 AM