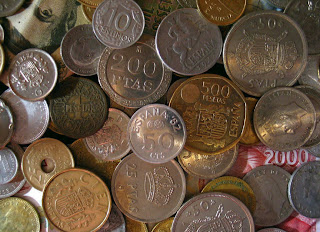 Spaniards are holding on to their old pesetas. The Bank of Spain believes that there are 1,717 millions of euros worth of pesetas that have not been changed in to the new currency.


In the old currency that equates to 285,685 million pesetas. Of that total the central bank says 904 million euros are held in notes and 813 million euros in coins.

Now when Spain changed from the peseta to the euro on January 1 1999 all the money in our bank accounts automatically switched. Those of us who had some cash took it to the bank to change but obviously many people didn’t. Indeed it wasn’t till 2002 that the peseta was finally phased out.

Without a doubt I have somewhere some peseta coins which I never bothered to change as does virtually every other household in Spain. This goes to make up a part of the total. Other sums have simply been lost or forgotten about. I remember when I bought an old ruin the builder who was to convert it busily searched through the canes that covered the ceiling as this was apparently a favourite hiding place to conceal notes from house thieves. Other canes no doubt still hold their booty.

However in this time of economic crisis every Spaniard is keen to lay their hands on any cash that is going. Hence the large bulk of the unchanged sums must be “black” money. To change it means admitting you have it to the Bank of Spain and in turn the tax authority. Large amounts will set the alarm bells ringing whilst large amounts that have been sat on for years will have those bells positively jangling. So we can expect the majority of the missing millions of pesetas to remain missing for evermore – unless of course the peseta makes a return should the euro fall.
Posted by SANCHO at 4:48 PM

The bar across the street put up a 1000 pta note on the wall behind the coffee machine - this morning! He says he has 'muchos mas' though hastily added that there weren't that many. As he did so, another customer pulled out a well-worn coin purse and pulled out seven 500 pta coins. A woman who had come in to ask about the bus schedule, smiled as she fished around in her handbag to find several old peseta coins.
This in a tiny village in the middle of nowhere on a single morning in a single moment.
Is absolutely everyone reading your blog, then?

There was a rumour that Jesus Gil has the missing pesetas buried in his back garden.