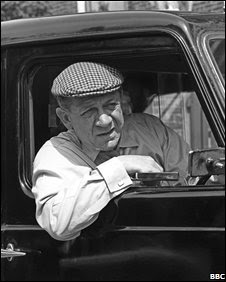 A gruesome tale this Saturday morning from the UK.

A man, believed to be in his 30s, tied a rope to a lamppost and the other end around his neck before driving off in his black-cab in Southwark, London, on Friday.

His body was found by police slumped in the car with his severed head yards away. Police are treating the driver’s death as suicide.

Officers were called to the horrific scene in Great Suffolk Street after the car had crashed into a pillar.

A Metropolitan Police spokesperson stated: “Officers attended and the driver was found dead inside the vehicle. The death is being treated as non-suspicious.”

Officers are keen to determine if the dead man was a genuine black-cab driver.

Easy enough – if the head is still talking – he was!

(Photo: Black-cab humour - the much loved Sid James as a London cabbie).
Posted by SANCHO at 10:03 AM

In New York it would have been a Yellow Cab