DIDN’T WE HAVE A LOVELY TIME…? 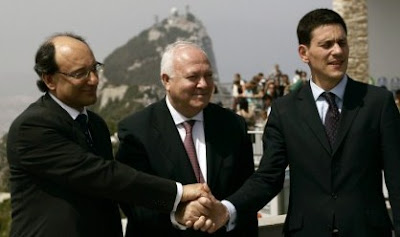 How does the old song go – “Didn’t we have a lovely time the day we went to Gibraltar?” OK so Fiddlers Dram sang Bangor but same difference.

Earlier this week in the respected Gibraltar Daily ‘Panorama’ its editor Joe Garcia wrote: “Superficially, the visit to Gibraltar of the Spanish foreign minister will be remembered as the day Miguel Angel Moratinos came to Gibraltar for lunch, almost like any other tourist, spending a few hours on the Rock and then returning to his native Spain.”

I take his point but it wasn’t Miguel Ángel Moratinos who was the day tripper but Britain’s Foreign Secretary, David Miliband and in his relaxed demeanour it showed. Parliament is now on its summer hols and Tuesday’s meeting of the Tripartite Forum was a chance for the perhaps future British Prime Minister to press the flesh with Caruana and Moratinos, have a nice lunch, go to the top of the Rock, see the apes (I hold my tongue here) and then home again.

For Gibraltar’s Chief Minister, Peter Caruana, and Spain’s Foreign Secretary, Miguel Ángel Moratinos, it was an historic occasion because it was the first time a Spanish government minister made an official visit to the Rock since it became a British colony.

Britain wants to see good relations between Spain and Gibraltar and the Córdoba Agreement signed by Britain, Spain and the Rock underpins the Tripartite Forum. However the fact is that the nitty gritty of these talks does not affect Britain at all.

The issue that nearly scuppered these talks before they started – Gibraltar’s territorial waters – does concern the UK because it claims the internationally accepted three mile limit. None-the-less it would prefer Madrid and Gibraltar to sort it out amongst themselves.

The other key issues such as the airport, ease of access across the border, pollution and management of shipping in the bay, cancer studies, co-operation between Gibraltar and the Campo de Gibraltar are all parochial matters far from London and more importantly do not affect votes in British elections.

Which really only leaves the issue of sovereignty. I do not believe that the current British Labour Government would have any objections to Gibraltar becoming Spanish or as a first step holding joint sovereignty. After all it was that very agreement the former Prime Minister Tony Blair tried to impose on the people of the Rock. Britain will uphold the right of the people of Gibraltar to decide whether they remain British or join Spain – but the Foreign Office, of which David Miliband is the head honcho, would be very happy for the Union flag to be hauled down or at least share the same pole. So it is hardly surprising that Miliband had a relaxing day away from the Westminster village on the Rock whilst Caruana and Moratinos got down to business with cat calls from their respective opposition parties ringing in their ears.
Posted by SANCHO at 10:17 AM

I understand the importance of the first visit by a Spanish minister but as neither sovereignty or the waters were on the agenda it seems just like a good day out for all.