ENTERTAINER GOES UP IN SMOKE 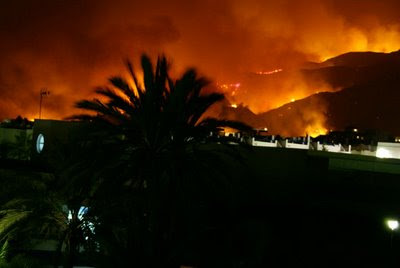 I am sure that like me you have seen the fires on TV that have ravaged Spain especially around Mojácar. I knew my good friend Lenox Napier lived in those parts but was shocked to receive an email from him to say much of his land, outbuildings and peacocks had gone up in smoke. Thankfully Lenox, his wife Barbara and her horses that she uses in her therapy work with disabled people through her charity, Animo, are all safe.

We are all used to seeing forest – summer fires on TV, sometimes vivid pictures from California - but everybody who has lived in rural southern Spain will have been confronted by this terrifying seasonal spectacle. Mercifully the infernos are often quickly brought under control by brave fire teams both on the land and in the air...but not always, as was the Mojácar experience.

Firemen were recently killed in Spain when engulfed by the flames. I experienced a horrific close escape in South Africa. Whilst staying with friends about 30 kms from Jo’burg a fire started on adjacent land. We all rushed out to try to stem the blaze in a nearby field when suddenly the wind changed direction and sent the flames roaring towards us. We literally escaped by inches as the inferno raced past engulfing all in its path.

Lenox is the great grandson several times over of Lord Napier who amongst other distinctions was a Governor of Gibraltar. He has lived in Spain for many a year and was the publisher of the much lamented “Entertainer” – one of the most popular newspapers on coastal Spain in the 1980s and 1990s. Indeed it was back in 1993 that I started penning my Gibraltar column for “The Entertainer” – and Lenox kindly gave me a book about the Rock which I use as a reference to this day.

I shed a tear for the lost of Lenox’s peacocks, birds which I happen to adore, but also join him in lamenting the loss of the first ten years of archive copies of “The Entertainer” that sadly lie amongst the ashes of one of his outhouses. A little bit of publishing history is lost for ever.

I bring you a photo of the Mojácar fire from Lenox’s own website but you can read all about it in graphic detail at:

http://www.theentertaineronline.com/news.php
Posted by SANCHO at 1:58 PM

When I read the Entertainer I lived in Marbella and always read Barry (Prinsens ?) column on the town and the Banus reviews. Sadly missed - please Lenox and his family survived unscathed!

The Entertainer was always there - and still is, online. So is Lenox and family, thank God.
Thank you Lenox for years of hard work and Entertainment. The paper archives were just that, paper, and your work lives on, one way or another. Your sense of humour will ensure that you see the light at the end of this fiery tunnel.