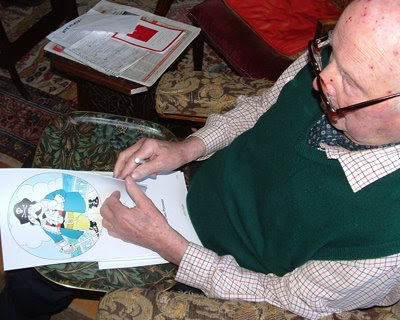 I spent a part of Sunday reading two obituaries. Rather than sad occasions they were a pleasant stroll down memory lane with many happy recollections of when I and the world were young.

I opened the obit section of the Daily Telegraph (which although printed in Spain only arrives in Ronda on Sunday) to find that John Ryan had died on July 22. Now John Ryan – author, illustrator, animator - was a childhood hero of mine because he was the man who brought us Captain Pugwash.

It was back in 1957 when I first sat down before my TV as the Black Pig sailed in to sight with Captain Pugwash in command, Tom the cabin boy, Willy and Master Mate all aboard waiting to do battle with their sworn enemy Cut-Throat Jake. Over nine years 58 of these shows graced our screens all in black and white although later shows were in colour.

Now the memory can play strange tricks because in 1991 Ryan took two British newspapers to court for libel and won. They had reported that Captain Pugwash was taken off the air by the BBC because of the risqué names of some of the crew – Master Bates, Seaman Staines and Roger the Cabin Boy, which I have to admit when I first read them they sounded true enough. Not so - they were the creation of students in the 1970s for university ‘rag mags’ but became established as an urban myth. 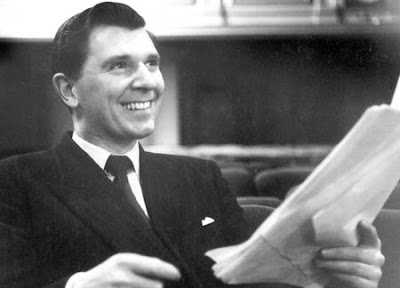 What I didn’t know till I read John Ryan’s obit was that the voice of Captain Pugwash was that of the celebrated actor Peter Hawkins. Now although Peter had started out treading the boards after the Second World War, having survived the sinking of HMS Limbourne, by the time I met him in 1968 he was well established as Britain’s top voice artist and was a truly lovely man.

Whenever the advertising agency I then worked for had a script to present to a client we called in Peter to record the track because there wasn’t a voice he couldn’t do and more often than not he did all the voices together in one take.

It amuses me now because I then though Peter was incredibly old – well he was 44 – and in those days anybody over 30 was past their prime. What I didn’t know till I found his obit on-line (he sadly died in 2006) was that Peter had also been the original voice for the Daleks and wait for it, Weed in Bill and Ben (BBC 1952-54). Now only true connoisseurs of early Children’s TV will delight in memories of Bill and Ben the Flowerpot Men – and if the mention of them has you scratching your head –then you are just too young - so “flobbadob”!
Posted by SANCHO at 11:17 AM

Tommy Edmondson, the man who provided the theme tune for the classic children's television programme Captain Pugwash, was paid £1.50 (30s) for his work. The sea shanty, which he learned from Scottish accordionist Sir Jimmy Shand, heralded the start of each episode of Captain Pugwash, the long-running BBC cartoon about a group of cowardly pirates. Mr Edmondson recorded his version of the Trumpet Hornpipe in the front room of his home in Harbottle, Northumberland, in 1954 when he offered to play traditional tunes to a BBC sound archivist who recorded them. He accepted payment, so forfeiting his rights to royalties.

Here is the theme-tune search You Tube for "Captain Pugwash Theme Tune".