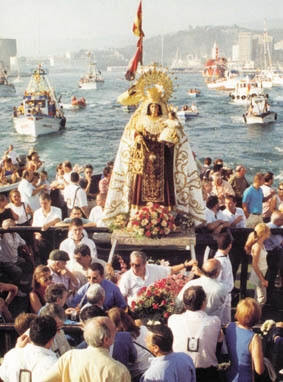 As regular readers will know I was raised a Catholic although I have long since fallen by the wayside.

However there was a time when I had a bit of a thing going with Our Lady of Carmel or the Virgen del Carmen in Spanish.

I think the probable appeal was that she was a local girl. According to tradition she appeared to St Simon Stock in Cambridge on Sunday July 16, 1251. He asked her for help for the Carmelites who were having a rather hard time of it and she gave him a scapular which gave certain benefits.

Indeed I remember a replica scapular handing on my dressing table mirror.

We lost touch so you can imagine my joy when I moved to Spain and discovered the Virgen del Carmen – “la estrella de los mares”.

Spain is one of the countries with the most devotion to Our Lady of Carmel where she is the patron of fishermen and the Spanish Navy. Many coastal communities will have a shrine to the Virgen del Carmen on the seafront especially near fishing ports.

On July 16 in fishing communities throughout the country a statue of the Virgen del Carmen is carried through the streets and more often than not taken out on a boat to sail around a harbour or land on a beach. The purpose is of course to seek safety for all those who earn their livelihoods from the oft treacherous sea. In true Spanish style such devotion is also accompanied by much singing, dancing and festivity. Curiously a number of inland towns and villages have also adopted the virgin as their patron including Jerez de la Frontera.

So tomorrow when we’ll all praising “the star of the sea” – raise your glass to her and pray for safety for all those that go down to the sea!
Posted by SANCHO at 12:55 PM

Email ThisBlogThis!Share to TwitterShare to FacebookShare to Pinterest
Labels: Our Lady of Carmel, Virgen del Carmen