MY GUN BOAT IS BIGGER THAN YOUR GUN BOAT 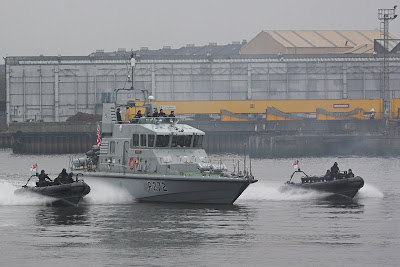 Being a Briton of a certain age I grew up in a world where the school atlas still had much of the world covered in red.

I also certainly knew of the concept of gun boat diplomacy. That was when the natives were restive so you sent a gun boat up their river, fired a volley across the roofs of their huts, they promptly took the missionary out of the cooking pot and all was peace and harmony.

Least that was the theory although I have to say I couldn’t give you one instance where I was taught of any such incident.

Now the chief minister of Gibraltar, Peter Caruana, has hinted in the Rock’s Parliament that he is thinking of buying bigger patrol boats to scare off Spanish marauders from the local waters.

To set the scene here Gibraltar claims under international law a three mile limit. There are many who argue that under the same international law the Rock could claim 12 miles but Britain who is responsible ultimately for such matters has declined to do so.

On the other side Spain says Gibraltar has no waters at all except those of its harbour. It was under the Treaty of Utrecht that Spain ceded Gibraltar to Britain in perpetuity and under the terms of that now faded and tatty document the Rock had no waters granted to it.

In recent weeks there have been instances were Guardia Civil launches have strayed, accidentally or deliberately, in to the Rock’s waters. Patrol boats of the Gibraltar Squadron controlled by Britain’s Royal Navy and others belonging to the Royal Gibraltar Police have been sent in to action to escort them beyond the three-mile limit. There was also another instance involving a Spanish Fisheries Protection vessel described as a frigate.

Now the governments in Madrid, London and Gibraltar have played down these incidents. So the decision of Caruana to up the ante is rather surprising. As he has no control over the Gibraltar Squadron it has to be presumed it would be the RGP who will get the super boats.

There two major problems here. First, if Gibraltar wants to play my gun boat is bigger than your gun boat diplomacy Spain’s answer could be to station an aircraft carrier in the bay. Then either Britain would have to respond on Gibraltar’s behalf or Caruana back down. Second, rather than escalate the problem the answer should be to seek a peaceful solution and as every school boy and girl knows that won’t be achieved by pointing a gun at anybody’s head...however big your boat.
Posted by SANCHO at 2:33 PM

Email ThisBlogThis!Share to TwitterShare to FacebookShare to Pinterest
Labels: Gibraltar