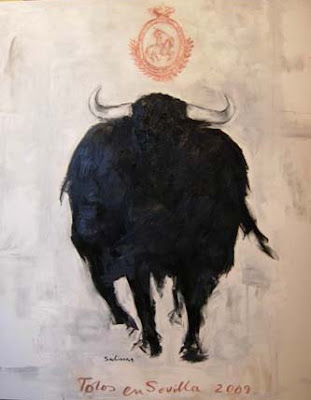 Make no mistake to enter the ring and face a charging bull takes guts and courage whatever your views on Spain’s ‘fiesta nacional’ may be.

Many years ago I visited a matador who had retired after he found he fell in love with the bulls. At his home he had a giant bull that he had rescued when it was just months old. It was tame or as tame as an animal with an inbred sense to kill that is the size of a very large car with giant horns can be. With Pepe I could stand alongside it, stroke it as he talked to the beast like a loving father, which he was. I certainly wouldn’t have gone near it alone.

I saw my first bullfight within weeks of arriving in Spain. It was at the small Mijas bullring that some say is the oldest in Spain but there are many other rivals for that title. I was determined to see for myself what all the fuss was about and sadly it was rather a grim affair. One of the bullfighters was the well-known Antonio José Galan, now like the bulls he faced sadly deceased, who carried out his task with skill and finesse. The other matador was a butcher, had the crowd howling with anger and was finally escorted from the tiny ring by Galan with his protective arm around the dejected man’s shoulder.

My second and last bullfight was just a few weeks later when the legendary Manuel Benítez Pérez, “El Cordobés”, appeared at the Málaga bullring. Some 25 years earlier Spain had given him a medal for tourism, he had become a film actor, bedded some 4,000 women and sired 30 children and still found time to become the country’s most internationally famous matador. I wanted to see this fascinating character before he left the stage and having done so have not visited a plaza de toros since.

However neither have I sided with either entrenched group of views on the ‘fiesta nacional’, as in religion I am an agnostic. Those who argue that if tourists stopped going to bullfights it would rapidly die are talking bull. The whole mystique of the ‘toros’ is deeply engrained in the Spanish character and there are those who would only rush to their TV sets when a bullfight is on – especially the celebrated events surrounding the major events such as Las Ventas in Madrid. The Spanish King does watch ‘corridas’, the Queen (who is Greek by birth) doesn’t. There are devotees and there are ecologist groups who would have it banned tomorrow. It can dominate television schedules; it is avoided by many like the plague. The plaza de toros is the central location in many towns but as in Puerto Banús this weekend the sands will not be stained with blood but the sweat of Spanish and German tennis stars as they compete in the Davis Cup.

One day, one day, the bull fight in Spain will perhaps die a natural death. However that will be after my hopefully peaceful passing, the slaying of many more bulls, the goring of numerous matadors and not before the aficionados of the ‘fiesta nacional’ put up a fierce fight to the death.

(As I wrote this news came in that the famed running of the bulls in Pamplona’s San Fermin festival had claimed the life of one of the participants. Around four and half minutes after the bulls were released a man was gored to death whilst nine others were injured. The festival was made internationally famous by Ernest Hemingway's novel The Sun Also Rises – and this is the first death since 1995 when 22-year-old American Matthew Tassio was gored.)
Posted by SANCHO at 11:16 AM

As long as Spaniards are true Spaniards there will always be toros!