HAPPY BOMBING DAY TO YOU 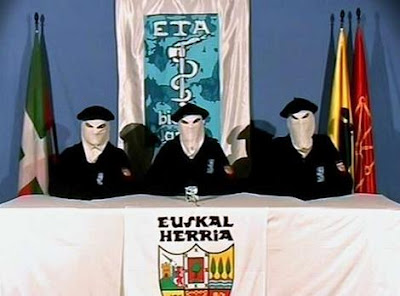 Today ETA celebrates its 50 th anniversary – if celebrates is a term you use in association with murdering thugs.

Hence the bombs of Wednesday and Thursday aimed at the Guardia Civil were no surprise – expect another big bang today or soon.

There are certain facts that have to be stated.

The Basque region of Spain enjoys all the rights and privileges bestowed on the Spanish people.

In addition it has its own freely elected autonomous government.

The Basque people overwhelmingly reject the form of nationhood that ETA wishes to impose upon them.

Whilst one in four Basques would like to see their own nation they roundly condemn achieving it through bloodshed and slaughter.

So the only thing left for ETA is to terrorise, maim and kill more often than not amongst the very people it seeks to “liberate”.

For Britons living in Spain the majority of us view the terrorism with stoicism. Our parents survived the blitz; we have lived through IRA bombing campaigns, so whilst ETA might shake us we won’t be stirred.

The Spanish people are also made of sterner stuff. A nation that within living memory experienced the horrors of a bloody civil war and a lengthy dictatorship are not going to be cowed by a bunch of masked terrorists.

So ETA will bomb away never comprehending why they are pariahs and not liberators.
Posted by SANCHO at 10:21 AM

Email ThisBlogThis!Share to TwitterShare to FacebookShare to Pinterest
Labels: ETA

I hope ETA does not watch Sky News. This broadcaster has played in to the terrorists hands by trying to scare Britons from holidaying in Spain and those living here. They should hang their heads in shame!