A STIFF SENTENCE FOR STIFF-ARMED GNOME 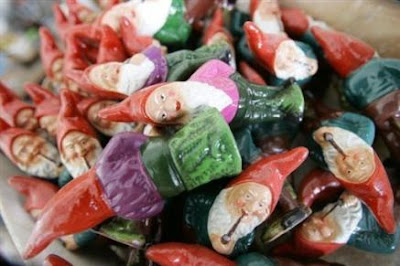 If I can I like to bring you a bit of whimsy at weekends although I must admit I often fail in that task.

Today I take you to Germany where prosecutors in Nuremberg have launched an investigation into whether an artist’s gold-coloured gnome giving a stiff-armed Hitler salute violates the country’s strict laws against the use of Nazi symbols.

The offending gnome standing 35 centimetres tall is one of 700 made by German artist Ottmar Hoerl. Nuremberg prosecutors are investigating after a complaint to local police.

Wolfgang Traeg, who is a spokesperson for the Nuremberg prosecutors (wouldn’t you just know his name would be Wolfgang) stated: “We’ve asked both the artist and the gallery owner to explain what the intention is. It’s not a crime if it can be proved that the artist was being critical of the Nazis.”

Apparently the golden gnome has an impish grin and was one of 700 used in a 2008 exhibition called “Dance with the Devil” in the Belgium city of Ghent. The gnomes were also displayed without objection in Bolzano, Italy and Aschaffenburg, Germany.

However giving the outlawed Hitler salute or using Nazi symbols is a crime in Germany. It is punishable by up to three years in prison hence the Nuremberg involvement.

For my part I do not find a gnome giving a stiff-armed salute offensive but I would give a stiff finger to all who inflict gnomes on us. Indeed three years in prison for each of the 700 gnomes created by Ottmar Hoerl would strike me as pathetically lenient – not stiff enough by half!
Posted by SANCHO at 1:46 PM

Happened to find this on the internet:

Curiously enough John Major, widely derided for his pooterishness, came from a not dissimilar background to the Grossmiths; his parents were circus performers. Coincidentally, his brother made garden gnomes —those quintessentially pooterish symbols of suburbia. Gnomes are German by origin; being supernatural and living underground, they were good at answering gardening questions. They were brought to England, to Lamport Hall in Northamptonshire, in 1847. One of the first batch survives and is insured for a million pounds: gnomes are taken very seriously. Nowadays the English ones are cuddly and Disneyesque with white beards, bed caps, big buckled belts over ample middles, often found sitting on mushrooms fishing in pools with rod and line.