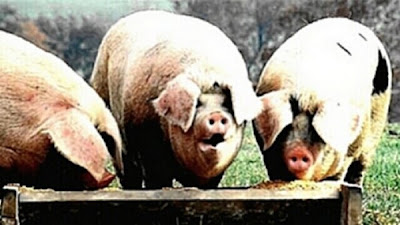 Is Britain governed by a bunch of crooks?

Of course you have to be very careful how you answer that question because if you believe that Britain’s politicians are 600 or so people sitting on leather benches in the Westminster chamber you’d be very wrong.

I would guess there are at least one million people active in British politics and every Tom, Dick and Harriet of them are in their own way politicians just as much as Gordon, Dave and the other one.

Grass roots activists have a deep seated political belief in the party they support. They give up their time to run the local party machine, to campaign, to fund raise. They certainly are not on the take. In fact they are expected to pay money in to the local party to finance its day to day expenses and election campaigns – so no big time corruption there.

My mind goes to Barbara who lives in my former village. After years giving much time and effort to her party she was persuade to stand for election on what is the lowest rung of office – a parish councillor. Parish councillors are usually independent of party – in our village they aren’t – but all are involved in the nitty gritty day to day issues that matter to residents such as the local pond, allotments, street lighting and so on. Not much dosh to be had there either.

Today Barbara sits as a District Councillor, so deals with much wider weightier issues such as town planning. Her role is duplicated many times over throughout the country in town, borough, county and various other types of councils.

Now if you ask me are there corrupt councillors – the answer is of course there are. Councillors are human beings hence if you gather 100 councillors or come to that 100 priests, nuns, doctors, lawyers or dustmen together you’d find a few bad apples in every barrel. That is the way of life. However all the councillors I have ever met have been like Barbara, hard working dedicated individuals whose crowing glory is to one day to be elected mayor or chairperson of the council. Corruption does exist but it is the exception rather than the rule.

Then we arrive at Westminster – the national stage. If you are a crook, if you are determined to rake in a lot of cash, then politics isn’t for you. To become a MP you first have to be selected by your local party – no easy task. Then you have to be elected – and with few safe seats in this day and age even if you do managed to win – your tenure is guaranteed for no more than 4 years. So now you are in the House, an outsider amongst over 600 MPs. You first have to slowly make your mark, acts as voting fodder and of course there is no guarantee your party will be in power at any time in your political life.

For the sake of this argument let us say it is – but even in that situation only about 100 people enjoy the trappings of power be it as Prime Minister or as a ministerial bag carrier. So the opportunities to pocket big cash are remarkably few.

Now I accept that too many MPs have been shamed by double dealing over their mortgages, having their moles dealt with at the public expense or providing an island home for their ducks. Yet even this is small beer when it comes to real corruption.

I believe some MPs are guilty of stupidity, of attempting to line their pockets but I believe their greatest sin is their contempt for the British public – the very people who elected them to office. MPs seem to have forgotten they were voted in not to rule but to serve...which is a very different kettle of fish.

By the next election the majority of Britain’s bad apple MPs will have departed the scene – either they will be deselected, opt not to stand, be voted out – some may even be in jail.

The British public are rightly angry over what has been uncovered. However I assure you that that anger is no more keenly felt that amongst the party activists, by the Barbaras of this world. They are betrayed voters and tax payers too but they are also politicians who have had their honest hard work and dedication devalued by a group of grubby MPs (like the outgoing Hogg) with their snouts firmly stuck in the Westminster trough.
Posted by SANCHO at 6:26 PM