DON’T TALK ABOUT ME WHEN I’M GONE 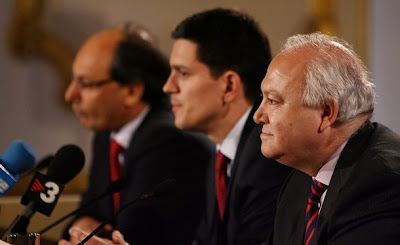 We should know later today whether the Tripartite Talks between Britain, Gibraltar and Spain will take place on the Rock on July 20 – 21. If they do it will be an historic occasion. The talks will be attended by Spain’s Foreign Minister, Miguel Ángel Moratinos, the first Spanish government minister to visit Gibraltar in an official capacity.

However the scheduled pow-wow has already caused ructions. Whilst Britain has assured Gibraltar that any talks about the Rock will be held on a strictly tripartite basis there have been suggestions that Moratinos and his British counterpart David Miliband could also meet bilaterally.

A spokesperson for Gibraltar’s Chief Minister, Peter Caruana, immediately stamped on that suggestion: “There is no question of a Miliband - Moratinos bilateral in Gibraltar or about Gibraltar.”

One can understand Gibraltar’s sensitivities on this issue. If there are talks in Gibraltar or about Gibraltar then they want to be there. Equally Spain would welcome a bilateral if only to demonstrate that in the end the issue of Gibraltar’s sovereignty is from a Madrid viewpoint a matter for the two governments.

However it could be also argued that as Miliband and Moratinos are meeting face to face it is only natural that they want to slip off and discuss the many other issues that concern the two EU nations. Logical maybe but not from the Gibraltarian standpoint – so any such chinwag will have to take place in a hotel bedroom wardrobe or across the border in a La Línea bar.
Posted by SANCHO at 11:13 AM

What a hoot - that wardrobe scenario would make a brilliant cartoon. I know quite a few Gibraltarians and they are all absolutely lovely people and I perfectly understand their qualms and rights regarding their future,
but their chief minister is in danger of converting them in outsiders eyes into Lilliputians.