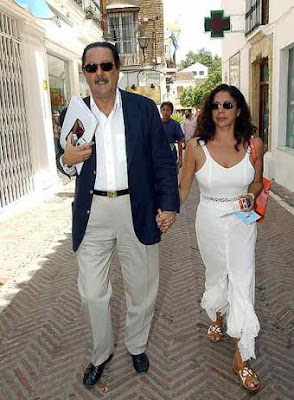 Yesterday was Wednesday so I met with my good friend Prospero for cud chewing in Jimena’s Bar Vecina.

Despite my many years my body is still a temple. By comparison Prospero is long of tooth but has a keener eye thanks to his bifocals. Hence whilst I chomped on my mollete con jamón y tomate he espied two men, one with a camera and another with a microphone.

By chance as we left the bar so did they. It was then that we noticed that the microphone was that of Antena Tres, one of Spain’s major TV stations. As they headed for Antonio’s Bar with Prospero in hot pursuit I went off to buy a bottle of sheep dip for the dogs – don’t ask!

In due course my phone rang – it was Prospero with the full story. Apparently they were on the hunt for the former mayor of Marbella, Julián Muñoz, who was rumoured to be on the prowl in our neck of Los Alcornocales national park.

Needless to say there is more to that side of the tale but I shall leave it to the ‘prensa rosa’ to bring it to you. ‘La prensa rosa’ is Spain’s answer to the News of the World and Sunday People except in also takes in magazines and various TV programmes on the major channels.

So who is Julián Muñoz? Well if you don’t already know let me explain.

Julián was a GIL councillor in Marbella when the corrupt Jesus Gil y Gil ruled that roost. When the fat man stood down he pushed Muñoz in to his place until he was disposed by Marisol Yagüe before soon after the corruption shit hit the judicial fan.

During his spell as mayor Julián started a public dalliance with the celebrated singer Isabel Pantoja. He then dumped his wife and set-up house with Pantoja in a property that yet may be revealed to have been acquired illegally.

Now Muñoz is a convicted criminal having been jailed for various town planning offences whilst a GIL councillor or mayor. I believe there are another 100 such cases in the pipeline although the prosecutor is desperate to do a deal so that the courts won’t be clogged up to kingdom come. He is currently a third level detainee, which allows him to spend most of his time out of jail and Julián has a job as the manager of a beach bar in San Pedro de Alcántara close to Marbella.

Early next year the court case surrounding the Malaya corruption scandal at Marbella town hall will start in Málaga at the Palacio de Justicia. This will be the largest such case in Spain’s history and many of the procedures installed in Madrid for the March 11 terrorism trial will be used in Málaga.

In the dock will be Juan Antonio Roca, the former director of town planning in Marbella, who is the alleged mastermind in the case involving hundreds of millions of euros, international money laundering, bribery, fraud –you name it. One of those in the dock with Roca will be Muñoz who if convicted will be washing dishes for many years to come in prison and not glad-handing the public on Marbella’s seafront.

Why is Muñoz’s presence in Jimena bad news for the small rural community? Well when Roca was arrested it was at one of his many houses – this one being in Jimena that as it turned out had been illegally built. So apart from the fact that Muñoz is a convicted felon he is a reminder of the times when certain people in power in Jimena flirted with the black money bags on the Costa del Sol and would have sold their souls (and our green and pleasant land) for a crock of fool’s gold.
Posted by SANCHO at 9:21 AM

Now then, let me make it quite clear that I have never had a relationship whatsoever with Mr. Muñoz, and that is not me in the photo.
In my capacity as a pseudo journalist (i.e. no qualifications at all), I can tell you, Dear Sancho, that whatever report Antena 3 managed to extract from their sojourn of yesterday, is apparently to air at about 4pm today on a programme called 'Vaya par ... de tres' Don't ask what it means, I have no idea, except that it's yet another of those 'prensa rosa' things and as dreadful as any other.

Of course the photo is of Julían(on the left)and the fragrant Isabel Pantoja (on the right). However the bifocals do look familiar!

My Mum always says" what goes around comes around", let´s hope it comes like a ten ton truck at full pelt then.