CARRACAO FLARES UP OVER ROCK’S WATERS 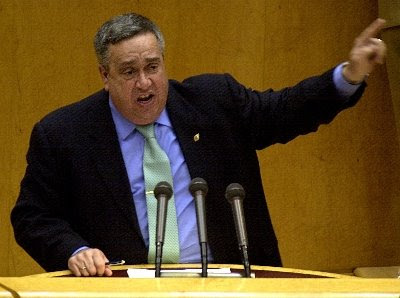 Like many journalists I am waiting to hear whether the next round of the Tripartite Talks between Britain, Spain and Gibraltar under the Córdoba Accord will take place on the Rock on July 20 – 21. If they do they will mark an historic event as when Spain’s foreign minister Miguel Ángel Moratinos takes his place it will be the first time a Spanish government minister has visited Gibraltar in an official capacity.

Sadly I fear that we may have to wait a while for that historic day. Gibraltar’s chief minister, Peter Caruana, made it clear in Madrid last week after the technical talks that before the go-ahead for the ministerial meeting could be given important issues over Gibraltar’s waters had to be sorted out.

There are two key issues here. First the EU has given Spain responsibility for the waters of the Rock in environmental matters. Secondly there have been incursions by Guardia Civil patrol vessels into those same waters. Both these issues have to be sorted out to Gibraltar and Britain’s satisfaction. Here were have the crux of the problem for under the Treaty of Utrecht Spain argues that Gibraltar has no waters other than those of the harbour whilst Britain and Gibraltar insist that under international law it has a three mile limit.

There have been reports that the Guardia Civil were in Gibraltar’s waters again over the last weekend. This has led the Gibraltar Government to sternly state that only it and Britain holds jurisdiction there and if vessels are ordered to stop by the Guardia Civil or any other Spanish authority they should ignore the request and summon help by firing a flare.

Now step forward Senator José Carracao. He is a former mayor of Jimena, ex-president of the association of Campo de Gibraltar town halls but now has special responsibility on relations with the Rock so knows more than a thing or two about matters Llanito. On this issue he suspects he smells a ship’s rat.

Carracao is adamant that the Guardia Civil would only have entered Gibraltar’s water to pursue drugs or cigarette traffickers with the knowledge and agreement of the Royal Gibraltar Police. “I am sure of that. They have not acted to provoke anyone.”

Rather the senator believes that the heightening of tensions is a ploy by Gibraltar’s chief minister: “which shows that he has not had the same political courage that Moratinos has had with him. This is a strategy to halt the talks. With such an attitude it will be difficult to continue to open new paths. I hope there is still a margin to have an agreement. There is an international expectation that we should avoid incidents like the New Flame.”

Carracao, who is a socialist, believes that Caruana is feeling the heat from GSLP leader and former chief minister, Joe Bossano, who is also a socialist, on the territorial waters issue. He could be right but with any issue relating to Gibraltar nothing is ever simple and even if it is – somebody would find a way of complicating it.

Will the talks take place next week? I suspect not but your guess is as good as mine.
Posted by SANCHO at 12:50 PM

More than 15 years ago I was involved as an architect in a proposal by a leading Gibraltar Hotel to carry out major renovations to their buildings and to rationalise what they had into a cohesive efficient and functional hotel while maintaining the essence and charm of the place.It was a project I was keenly interested in partly because of the architectural challenge and partly because of the history of the place.
However during the analytical stage of the project some minor issue arose resulting in the Guardia Civil closing the border at a whim or being so officious that it took 4 hours to cross the border.The directors of the hotel quickly realised that all their investment ideas for their business
were basically at the mercy of the Spanish police and that any prolonged dispute could ruin their business.The project was postponed and to this day as far as I know has never been revived.This showed me in very clear terms that the party who would benefit most from an agreement with Spain is Gib.But it seems Gibraltar is still entrenched in old attitudes and suspicions which will limit it's progress and development unless there is a serious change.

A long long time ago, there appeared on Jimena walls graffiti which read something along the lines of"...pronto somos los Jimenatos los estranjeros, fuera guiris" and Caracao, who was the mayor at the time, sent round a written apology to all the expats in the village ..... rather sweet.

Tony Murphy, it is not Gibraltar that is entrenched in the past but Spain.

Which is little wonder given that the concept of territorial waters didn't emerge until much later.

The international convention on the seas, a far more recent treaty, gives every spot on the planet earth the right to territorial waters. And that includes Gibraltar.

The trouble for Spain is that the treaty itself explicitly states that signatories can not do this! Therefore her unilateral declaration has no legal effect.

It is because of her claim to waters being utterly baseless in law that she refuses to refer the matter to the ICJ for a ruling. Because she knows she will loose.

Now ask yourself who is living in the past, Gibraltar - which has for YEARS been saying spain needs to talk about things and find working relationships, or Spain which is attempting to rely on a 300 year old document, which has been superseded by numerous international laws and agereements she has entered into and refusing to refer anything to court.