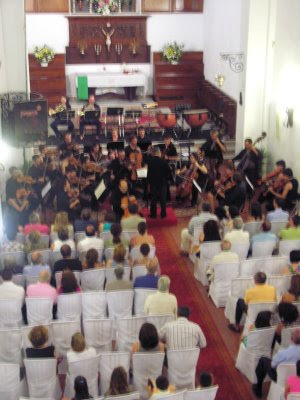 If you believe that children should be neither seen nor heard then Spain is not the country for you.

As a Briton I must admit to being full of admiration of a nation not only with a true sense of family but who adore their children. It is not unusual to see a teenage girl or boy abandon their moto, run across the street to embrace and kiss a grand parent. In England you’d duck in to a doorway until they pass hoping they hadn’t spotted you.

So you have to accept that any public place, especially restaurants, will have their full quota of children in attendance. Last Saturday I went to an outdoor restaurant for dinner where lots of the tables had children. Well in fact they didn’t because number one rule is that when the adults are seated the children are sent off to play – preferably around your table.

Right now my village is holding its international music festival. In my experience classical music concerts and children do not mix. I watched with interest as a Spanish couple with two children under ten arrived asking to hear the Manuel de Falla orchestra.

The woman in charge of admittances asked did they have invites to what was the inauguration to the festival. They said they hadn’t but explained their children really wanted to listen to the orchestra.

The two boys were attractive with shoulder length blond hair, a style more normally associated with wealthy parents but I doubted this was the case. I some how suspected that they were not aficionados of Haydn or the cello – but hey, what do I know?

They were duly admitted and seated two rows in front of me. The family had the entire row to itself and soon one of the boys was examining the door on to the cloister. During the performance they wandered up and down, played with their parents, smiled at those around them but the cello of Cesar Jiménez Muñoz passed them by.

At one stage the mother had both boys on her lap as she stared daggers at her husband. When the couple in front finally abandoned their seats the father left the mother to it and moved up a row. For the 90 minutes that the orchestra played away, they played around.

There were other youngsters in the audience and to a lesser extent they were bored to tears and no doubt we and they wondered why they were there. I recently went to a cello recital in Ronda where an obnoxious girl ran up and down the isle whilst her mother listened in wrapt attention to Bach’s work.

I must admit the higher the prices the less chance of parents forking out for their little ones to play off tune. However as one who believes that classical music should be accessible to all I am left in a dilemma – suffer the little children to come unto me – or just suffer in silence their performance.
Posted by SANCHO at 9:54 AM

Quite take your point in today's blog about bothersome childen. One wants them to be introduced to decent stuff but the parents surely should dicipline them OR LEAVE ...

Mmmmm, I have many similar experiences, one of the best concerts I've ever seen in my life happened in the Casa del Gigante with a Jewish band from Málaga, Klezmatica, and like you I hade to contend with children from 2yrs to early teenage playing up. The band were gracious, and even played to the kids at times, so the show wasn't completely ruined but there were some lovely solos that demanded silance to hear every note, sadly ruined by kids throwing bits of paper at each other.

I always wonder if Spanish parents even notice what their kids are doing?

Have you ever been to your childs´school play/"playback"/communion etc.? you
wouldn´t want to twice- complete waste of time- can´t hear a bloody thing for the row the parents are making during the performance- until it´s their little mites turn of course and then they expect everyone to shut up. How the teachers, who have nurtured these little performers through their
rehearsals don´t throw them all out I have never understood.