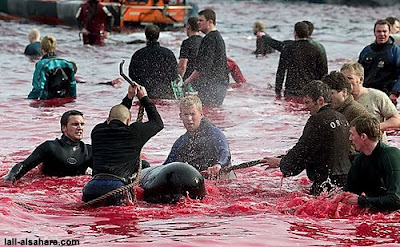 My blog of yesterday, A Sea of Pink, caused a reader to write to me as she feared I might be covering the wholesale slaughter of whales and dolphins in the Faroe Islands, which are part of Denmark.

I wasn’t - but her email caught my interest so today I am highlighting this disgraceful ‘tradition’.

Now I have met only a few Danes in my life and I have to say they were all decent people. However my ancestors in England and Ireland would probably have a very different take on the habits of that marauding nation.

As a meat eater I am going to be careful not to also be a hypocrite. Only yesterday a friend told me how she had shared dinner with an American family. The daughter burst in to tears causing a scene as her granddad had ordered the rabbit. However she happily munched away at her chicken whilst her brother chomped on pork.

So I accept that one man’s rabbit is another man’s seal and one’s woman’s dolphin is another woman’s halibut.

Sadly the annual slaughter of whales and dolphins has been going on since the 10 th century – around the same time as Danes were raping and pillaging through ancient Britain. Greenpeace and many other environmentalist groups have protested at the blood fest in which 17 villages take part in this licensed massacre. Faroe Islanders defend their annual rite as part of their identity and culture.

I’m sorry Faroe Islanders but such practices have no place in modern Europe and if Denmark doesn’t act then the wider community of nations must. If this slaughter is part of your identity and culture then its time to seek new values for your people to follow because you shame your nation and offend common decency.
Posted by SANCHO at 5:09 PM

These blood fests are unfortunately all too common.There are numerous in Spain where donkeys are basically beaten to death by villagers celebrating a Feria or other local festival.That other great "licensed massacre" bull fighting takes place weekly in Spain.I have never dared to bring this matter up with my Spanish friends as I feel that as a guest in this country I must respect the heritage and traditions
of my host country - but it doesn't mean I like it or condone it.Yes by all means go out and catch a fish or shoot a rabbit to eat.But to me any blood sport is barbaric.Killing for killings sake,for entertainment is just wrong whether you are fox hunting,hare coarsing, bullfighting or killing whales.The Roman arena still exists in many guises and our bloodlust confirms that we have a very long way to go before we can call ourselves civilised.