IS SPAIN A DEMOCRACY? 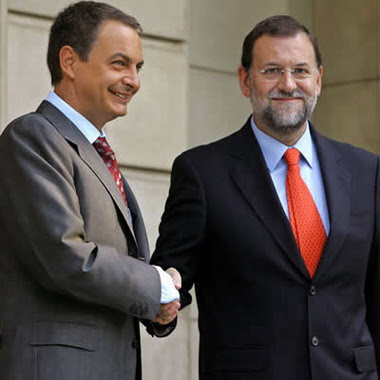 Spain is a key member state of the European Union and I believe is viewed by all the other governments as being a true democracy after the years of dictatorship under Franco.

However that is not the view of all in Spain who argue that what was created after the death of Franco was not democracy but a new regime that is just as authoritarian as the old.

On the blog ‘Voto en Blanco’ Francisco Rubiales argues that to be a democracy a nation has to honour seven or eight golden rules and these he maintains do not exist in Spain.

So what are they?

The separation of the basic powers of State – whereas such powers are held in Spain by the parties who even appoint the judges.

The right to freely elect their representatives – but in Spain you vote for a party list which is selected by the politicians.

The citizen should be sovereign and the controller of the system whereas in Spain the voter is marginalised and excluded from the decision making process.

All should be equal under the law. However Francisco Rubiales quotes the former Minister of Justice Mariano Fernández Bermejo. He resigned in February after hunting without a licence with Judge Baltasar Garzón who was about to open a corruption investigation involving the opposition Partido Popular but in the past said - the interpretation of the law should be soft on friends but rigorous and lethal for opponents.

Society should serves as a counterbalance to the State but in Spain society is occupied by the political parties that control everything from trade unions to the media along with universities, religious organisations, associations and even companies.

A free press capable of controlling and criticising the powers of the State. As an esteemed journalist Francisco Rubiales believes the media in Spain is not meeting its mission to democracy to tell the truth at all costs, to criticise and monitor the powers of government in order to curb its authoritarian tendencies.

Francisco concludes by stating that he could go on to list many other shortcomings such as the tyranny of the parties, corruption, institutionalised lies, arrogance and the start of the hatred of politicians especially amongst the more literate sectors of society. He adds that he regrets to say that there are still many Spanish democrats who believe they live in a democracy but they need to have a good reality check to open their eyes to the tyranny of the political parties working under the guise of democracy.

Now I would hazard a guess that whilst many Spaniards, especially those who are part of the political system, would strongly object to Francisco’s views in contrast many Britons (and Northern Europeans) living in Spain would nod their heads in agreement. This may be democracy – but not as we know it – yet we accept it because we take the view that Spain is a young democracy recovering from decades of dictatorship so allowances should be made. Of course it falls to Spaniards such as Francisco to say “this is not good enough” and demand the changes to bring democracy to a level of acceptability. However Britons more than anybody will know that whilst they pride themselves in living in a true democracy all is far from well with that nation’s body politic and the same can probably be said for all countries that describe themselves as democratic.