A BAY AT BAY 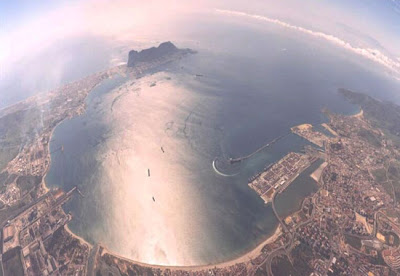 I was yesterday reading a very interesting report by my esteemed colleague Brian Reyes in the Gibraltar Chronicle (see note at the end of this blog). It concerned a report published by the environmental group Greenpeace in conjunction with environmental groups on both sides of the border on the need for the Spanish, British and Gibraltarian government’s to put their political differences aside in order to tackle the problems in the bay zone.

One paragraph caught my eye: “As if to underline the point, the report is careful to refer to the bay as ‘the Bay of Algeciras/Bay of Gibraltar’, reflecting the differing positions on jurisdiction.”

The naming of the bay has been a constant thorn in my side. If you are Gibraltarian – it is the Bay of Gibraltar, which I believe it also its internationally accepted name. If you are Spanish – it is the Bahía de Algeciras – the Bay of Algeciras. Over the years I have received stinging fleas in my ear from Llanito readers when in an article on Gibraltar I have referred to the bay with its Spanish name.

Now I am more careful. If writing specifically for Gibraltar – I use the Bay of Gibraltar. If I am writing from a Spanish angle – it’s the Bay of Algeciras. More often than not I duck the issue and talk of the bay zone.

Brian also referred to “less well-known concerns such as the fact that most towns in the area - including both Gibraltar and Algeciras - pump untreated sewage directly into the sea.”

Now I have known for a long time about the problem of Algeciras. Indeed I have written on it many times as it has been faced with action by the EU as it is the only town of its size in Spain without a water treatment plant, contravenes Euro law and hence Madrid faced heavy sanctions. A sewage plant is now under construction but it would be a wiser man than me who would give you a date when this will actually be operational.

However I had no idea that the same situation existed in Gibraltar. The Rock with a population of no more than 30,000 is tiny compared with its neighbour across the bay with an official population of 115,000 but where many more people live and heavy industry exists.

None-the-less I was rather alarmed to learn that Gibraltar with its advanced infrastructure – with plans underway for a new airport plus major developments off the west beach – has not installed a water treatment plant. This after all is the most basic of requisites.

There are of course numerous major issues in the report such as bunkering, shipping, nuclear vessels, cancer concerns and the environmental effects of heavy industry. All the same it has to be said that if we are concerned with the quality of water in the bay and Strait then water treatment plants in all towns must be a top priority.

(To read Brian Reyes – Letters from Gib, an excellent blog, click on the link on the right hand side of this page. I was particularly interested to learn about his recent experiences in the House of Lords).

I try to call it The Alboran Basin by the way.

Yes for Gibraltarians it is our bay and I think you are right it is the internationally recognised name too - probably because Gibraltar was a major English/British colony when Algeciras was just a fishing village!

JJ Uceda from Italy and loving our Bay more than ever said...

Why Gibraltar Bay?, Why Algeciras? Why not La Linea's Bay or Perhaps San Roque's??? (.. just being funny...!)
By the way, after all the bad reputation my home town always has, La Linea has shown some kind of education on this and does treat it's Sewage and part of Campamento's "chocolat waters", although much still have to be done about it; A tiny lesson for important places such as Algeciras or Gibratlar which are always the FIRST & BEST in all...)
Thank God that our Beatiful Bay still exists... and Thanks to the ESG & The Bucket Brigade and Brigada de la Bahia for their daily Environmental efforts demanding best clean air, blue sky, clear waters and green fields..., in care of our grand.grand children to enjoy all these. I'm proud of my BAY -whichever name it is written.. Bahia, Bay or Maravilla de la Naturaleza- and proud of being part of the Environmental Move.