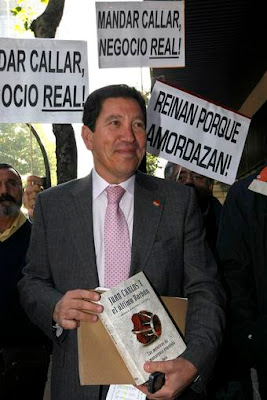 The left-wing mayor of Puerto Real, José Antonio Barroso, appears in the Spanish High Court today (Tuesday) to answer the charges that he called King Juan Carlos amongst other things corrupt.

He made the remarks at the 77 th anniversary of the Declaration of the Second Republic on April 14 2008 at a meeting in Los Barrios.

Now Barroso is a leading member in Cádiz province of the Izquierda Unida and a Republican - in my book he should be free to express his views.

Not so says the State prosecutor so he could be fined 10,800 euros.

The Spanish King and the Royal Family are largely popular but there are those who genuinely hold the view that Spain should be a Republic and that the king comes with a large amount of baggage.

During the meeting Barroso said of King Juan Carlos:

“El Borbón de condición deleznable, el presente no es menos deleznable de lo que su padre fue.”
Basically that his father was a debaucher and the King is corrupt as was his father.

Now I am sure there are many people who hold similar views about the British Royal family yet they don’t end up in court by expressing them at a Republican meeting.

Had Barroso urged people to kill the king or members of the Royal family or threatened to do so himself he would have a case to answer.

But in a democracy we are all entitled to express our genuinely held views freely and without hindrance and if the king finds them objectionable then it is he and not the State prosecutor who should seek legal address.

That is what free speech is all about. We might not like what somebody says but we should defend his or her right to say it.
Posted by SANCHO at 6:43 AM

Freedeom of speech is a right we in the democratic world tend to take for granted.It is also something which is widely abused, particularly in the media.David Beckham recently said,after being accused of having an affair again, that 90% of what appears in the media about him is false,and if he took the time to deny every allegation he would never have time for anything else.How often do we see newspapers in court being sued for a story which was untrue.Freedom of speech allows any journalist to make any allegation about anyone.If you are not wealthy enough to sue for slander or defemation,then you have little or no comeback.Sr. Barroso has every right to declare himself a republican and state his anti royal opinions.However accusing the King of corruption is a serious issue.If Sr.Barroso decided he didn't like you and at a public meeting said he thought you were a criminal or a paedophile, would you be so tolerant of his right to say so.Would it be fair that you would have to endure a court case and the huge expense that goes with it,to seek redress?