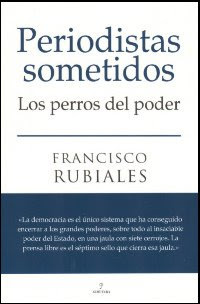 Regular readers of my blog will know that I often refer to themes that are carried on Voto en Blanco – a blog that I believe is required reading for all Britons living in Spain. As I have explained previously I do not argue that you should accept all or any of the views expressed there but I do believe that as foreign residents in Spain we should engage with themes and views being discussed by thinking Spaniards.

Voto en Blanco is the blog of Francisco Rubiales – an esteemed Spanish journalist who amongst other positions was the “Madrid” correspondent in the Far East and Mexico and headed the EFE bureaux in Cuba, Central America and Italy. Now he has sharpened his ancient quill to pen a new book “Periodistas Sometidos. Los Perros del Poder” (Almuzara 2009). It is the last of a trilogy that deals with politics and power – in this volume he looks at the role of journalists. It is being read with great interest by politicians, journalists and citizens who are interested in knowing in detail the deep crisis in the media in Spain.

Francisco lays the blame, in part, at the foot of journalists for what he sees as the assassination of politics by the Spanish political parties that has transformed the country into an oligarchy without dignity or respect. “The free media is the spine of democracy, but the submissive media is the supporter of tyranny.”

Francisco states: “The Spanish media is ill because there are too many professionals who have resigned to independence in which they do not propagate the truth, but the truth of the power, that is very different, and that has been in exchange for money, privileges or, which is worse still, awaiting being compensated by the powerful ones. Those journalists who contribute light, independent information and truth, are the guardians of the democracy, but those that have been put under are “Los Perros del Poder” - “the dogs of the power”.

In reality many journalists – perhaps the majority – are not free even in democracies to express independent views or facts. They instead have to reflect the views or stances of their employers – often large media groups.

The biggest political story with implications for democracy is the revelations in the Daily Telegraph over MPs expenses. However it was the management of that newspaper that decided to buy the discs containing the damning information whilst other newspapers passed up the opportunity. It was only then that the project was handed over to journalists.

A degree of independence is allowed in some newspapers. Staying with the Daily Telegraph on Saturday it ran a leader urging its largely “conservative” readership not to vote for UKIP in the Euro elections. However its respected columnist, Simon Heffer, on the same day in his column stated he would be voting for UKIP and suggested his readers did likewise. Two different “conservative” viewpoints were allowed within the same publication – but Simon Heffer would never be tolerated in the socialist Daily Mirror, nor probably would he ever wish to toil there.

Of course as Francisco identifies it is on the internet and in blogs that journalists can break free from the shackles and state views, present facts or instigate arguments that would never be tolerated by our media or political masters in conventional publications. Without doubt the internet is a vital tool in preserving democracy but those who would wish only to propagate their version of the truth also know this – hence we must be prepared to defend that freedom as many journalists have done in the past with imprisonment and even death.

(Voto en Blanco – http://www.votoenblanco.com/
This column also appears on Blogs de Cádiz – for both click banners on the right)
Posted by SANCHO at 9:33 AM

They say the internet is too large to control and police - but China does and so will other governments if they feel threatened by what brave journalists and bloggers write.

I think that the power of the 'institutional advertising' - truly
massive amounts of public money spent on the media - makes it pretty hard for much decent and independent reporting. Perhaps this is why political blogs are starting to take their place in Spain. We've certainly seen the influence of the pols in the last few weeks - PP/PSOE good guys/bad guys and no one else gets a mention.