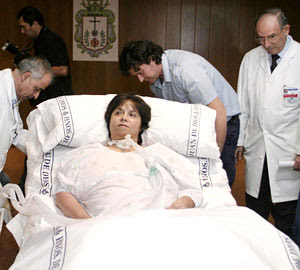 The Andalucía regional government has now approved its law for a dignified death, legislation that has very much been pioneered in Spain.

The law has the support of the ruling socialists, the far-left Izquierda Unida as well as the Partido Popular that traditionally is the hardest critic of such proposals. The spokesperson for the PP in the Andalucía Parliament, Esperanza Oña, stated: “Everybody has a right to a dignified death because nobody wants to die with unnecessary suffering.”

The law will allow a person aged 16 years or over who is terminally ill to reject treatment that only prolongs their life in an artificial manner. It does not allow for euthanasia or assisted suicide. These two subjects are covered by the Spanish penal code which a regional government has no right to alter. The law does not allow for medical staff to refuse to comply with a patient's wishes although the rights of doctors and nurses are laid out in other legislation.

The need for the legal provision for a dignified death has been driven by such tragic cases of that of Inmaculada Echevarría. This woman who suffered from progressive muscular dystrophy was kept alive for 10 years on a breathing machine against her wishes. She died at the age of 51 having been immobile for 30 years but didn’t want her breathing machine turned off as she said that would be a “cruel” death but wanted a lethal injection instead. She finally died at the Hospital de San Juan de Dios in Granada after being heavily sedated to ensure she didn’t suffer when the life support machine being disconnected.

During one period when my former partner was in the Punta Europa Hospital in Algeciras with terminal lung cancer she shared a room with a man also in the final stages of the disease. He lay in bed largely unaware what was going on around him with his wife and her sister in attendance. The sister confided that it was a terrible ordeal for all of them and stated that had he been in hospital in Madrid his and their agony would have been peacefully ended.

Whether that was fact or fiction I know not. I do know that some six weeks later he was still being kept alive. My partner had been taken back in to hospital but was in a different room. The man finally died one night crying out in much pain which must have had a terrible effect on him and his family in his final moments as well as the fellow cancer sufferers who would have feared such an end for themselves.

May we all have the good fortune to die in peace.
Posted by SANCHO at 10:15 AM

Most of us have probably got stories like yours. Heaven knows I've got enough. There is a form you can get from the Junta,"Inscriptión en el Registro de Voluntades Vitales Anticipadas de Andalucía."