S.W.A.D.K – SIGNED WITH A DEADLY KISS 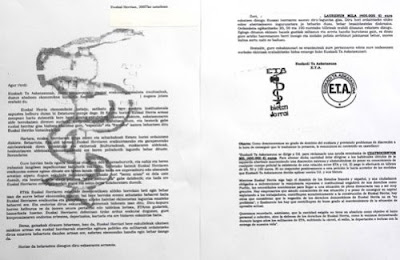 For years romantic teenagers sent letters with – S.W.A.L.K – signed with a loving kiss – in capitals on the back of the envelope.

For a long time it has been a well-known tactic of ETA to raise funds by sending extortion letters to businesses in the Basque region. However even this terrorist organization which thinks nothing of slaughtering innocents has still managed to raise eyebrows by including on its mailing list a 14-year-old boy.

The new wave of letters is to coincide with the anniversary of the organization and bears the number 50 as part of the logo. The president of the Confederación de Empresarios de Navarra (CEN), José Manuel Ayesa, stated that the letters started to appear in May and on average demand amounts of between 120,000 and 180,000 euros although some are as high as 400,000.

The inclusion of the 14-year-old marks a new tactic on the part of the terror group. Instead of just sending the letter to the business person they are now including a member of the family to ensure the contents of the missive are noted by all. However as they take the details from the town hall census ETA doesn’t know who specifically it is writing to...but they are deadly serious none the less.

Ayesa has repeated the call to all those who have received the letters not to give in to this extortion from what is a terrorist group...but that requires bravery and defiance from the targets.

The problem for ETA is that its murderous campaign for a Basque state has little popular support in the region and hence no reliable source of funding. The Basque region shares the same rights and privileges as all the other component parts of Spain. Therefore to make its cause known ETA bombs and kills both within its would-be homeland and wider Spain.

Perhaps it should take the “50” emblem off its letters and write S.W.A.D.K instead.
Posted by SANCHO at 12:08 PM

ETA, the IRA, all terror groups are just that because they have no regard for human life - full stop.