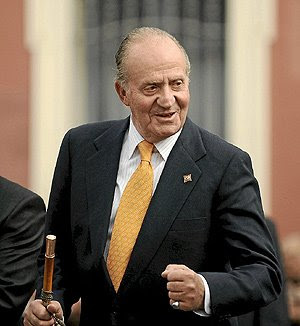 On Tuesday I wrote about the mayor of Puerto Real, José Antonio Barroso, who was that day facing the judge – José María Vázquez Honrubia – in the High Court in Madrid.

He was answering a case brought by the Ministerio Fiscal that in April last year at a Republican Rally in Los Barrios he had made statements in his speech that were injurious to the king – Juan Carlos I.

The State prosecutor was seeking a fine of 10,800 euros and in the event the judge found Barroso guilty of excessive criticism of the monarch and wacked him for 6,840 euros – 18 euros a day for 12 months.

For the full story you can read my blog below but the essence is that Barroso, a staunch Republican, had stated his belief that the king is corrupt, as was his father who was also a playboy – or words to that effect.

I believe this is a serious issue but in life I have found most such stories have a humorous side as does this.

It now transpires that the co-ordinator general of Izquierda Unida – the party of José Antonio Barroso – says the IU is to write to the king to ask him to help pay the 6,848 euros fine. He argues that Juan Carlos I has more financial assets that Barroso and the IU which has economic difficulties.

I am not sure whether Cayo Lara was smiling when he announced this news – I certainly was when I read it. However it does strike me that if Barroso is a staunch Republican and anti-monarchist (as well may be Lara) then the last person they should ask for help is the king – but then what do I know.
Posted by SANCHO at 9:36 AM