WHO IS MIR HOSSEIN MUSSAVI? 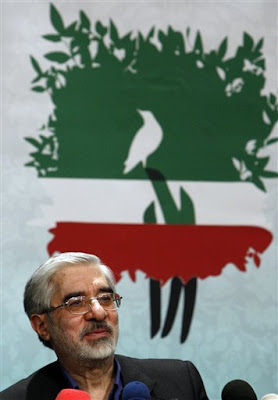 I haven’t blogged on the situation in Iran till now. To be honest it has left me rather perplexed. I have vivid memories of the overthrowing of the Shah and the Islamic regime that by seemingly popular acclaim took his place.

I am not surprised that young people in Iran are rejecting the strict Islamic rule. They were not even born when the Ayatollahs took over, have a different view of the world, are no doubt Muslims but do not wish to be ruled by the strictures of the Islamic revolution.

So what has puzzled me is that Mir Hossein Mussavi should be the catalyst for their rejection of the status quo. Young people have laid down their lives in his name and other languish in prisons or hide in fear.

Of course another generation of young Iranians also laid down their lives at his behest. Mir Hossein Mussavi was prime minister of Iran for eight years which included the bloody war with Iraq. Hundreds of thousands of young Iranians lost their lives as they rushed in to battle crying “Allah Akbar”. His hands are already wet with his country’s young men’s blood.

So this Islamic gentleman and his charismatic wife (by traditional Iranian standards) seemingly is the man carrying the banner of freedom for his people.

Has this Persian leopard changed his spots?

Are the young people who are dying and protesting in his name true followers of Mir Hossein Mussavi or do they hope that if he can break the strangle hold of the mullahs they can then go on to win their own revolution?

I know not but I am old enough to have seen many false dawns that have, in time, been the heralds of profound change.
Posted by SANCHO at 12:32 PM

I think there is a general unhappiness in Iran with the present regime and they see Mussavi as a way out. Whether that would or would not be the case we shall probably never know.

I was always rather sorry about the Peacock Throne ...