GOING ROUND IN CIRCLES 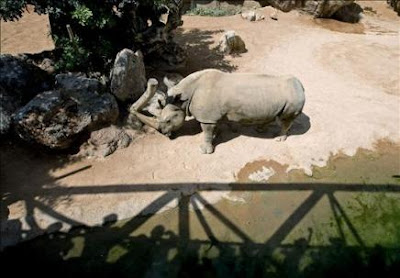 Rómulo, one of the rhinos at the Bioparc in Valencia, is receiving therapy to stop him walking round in circles. Apparently he has acquired this habit as he lived in a confined space for 22 years in the city’s old zoo.

The technical director of the Bioparc, Miguel Casares, says the 30-year-old rhino turns in circles of 18 metres in diameter. That was the room he had in his former enclosure and even though he now lives in a much large space he sticks to his old habits.

To help change the habits of nearly a lifetime the Bioparc has changed the objects around the rhino and introduce the smells of other species to get Rómulo to react and hence break away from his circular life.

Casares admits that there is only a small possibility that Rómulo can be cured but insists that otherwise the rhino is in good health.

I don’t know about you but I have been going round in circles for years with no sign of breaking the habit. Changing the sand, tree trunks and smells around me might help. I will let you know. Meanwhile if any reader knows a better cure – you know where to find me.
Posted by SANCHO at 9:23 AM

Email ThisBlogThis!Share to TwitterShare to FacebookShare to Pinterest
Labels: Bioparc, Rhino, Romulo, round in circles, Valencia