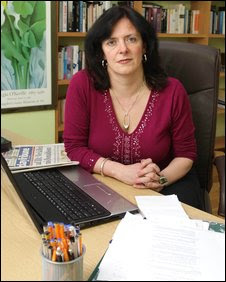 As this week I have been blogging about freedom of speech and the role of journalists it is perhaps appropriate that I should today feature the case of Suzanne Breen.

Suzanne Breen is the Northern Ireland editor of the Dublin-based Sunday Tribune and could be jailed by the Belfast Court for not handing over to the Police Service of Northern Ireland her notes, recording material, mobile phone and other material relating to her articles about the Real IRA.

There are two worrying aspects about this case.

First the protection of confidential sources is internationally recognised as one of the basic principles of press freedom. If journalists are forced to disclose source information, whether to the state or other organisations, the very future of investigative journalism could be put at risk. Indeed it is no exaggeration to say that Breen’s life could be laid on the line.

Second, and astonishingly, we are talking of the United Kingdom where Anti Terrorism legislation is being used in this case so it is being heard in private, without even Suzanne Breen or her legal team being given the opportunity to hear the case being put by the police. This means that Ms Breen will be forced to make her case without even knowing the evidence that has been put by the other side. Such a move seems to go against the very basic principles of justice.

When it comes down to it if Suzanne Breen is ordered to hand over her materials she will refuse and be jailed...the alternative is not an option.

“The basis for the PSNI application is evidence provided in private ... when even Ms Breen’s legal team were barred from the court. How can Suzanne respond fully to this application since neither she or her legal team are aware of what precisely was said in court by the PSNI ...”

“The right to protect sources is vital to journalists. Recent revelations in the UK regarding the expenses regime at Westminster underline the importance of protecting Whistle Blowers. Any legal threat to the protection of sources is a direct threat to whistle-blowers and is therefore not in the public interest.”

If you wish to add your voice in support of Suzanne Breen and press freedom sign the petition at this link.

http://www.ipetitions.com/petition/protectsources/index.html
Posted by SANCHO at 10:23 AM

Once again the danger of the abuse of anti terror legislation has raised it's head.And it's only at moments like this that British people are realising just how much power they have allowed their government in the name of anti terror.But as has been seen numerous times already this power is being used to spy on people for all sorts of reasons including to check what people are putting in their dustbins !!!!The government has basically frightened people into believing there is a terrorist under every bed ready to slit their throats or bomb their city.The legal procedures you describe regarding the case sound like something out of China or North Korea.When the law stops being transparent and normal checks and balances are discarded then we are truly heading for what many are already describing as a police state.
Tony Murphy