GIBRALTAR NEEDS ITS OWN EURO CANDIDATES 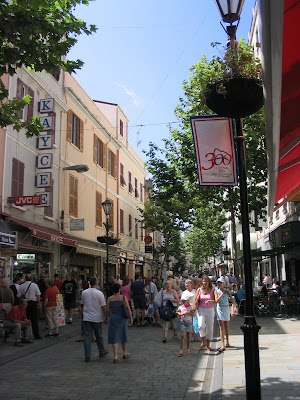 Last Thursday Gibraltar along with the rest of the UK voted in the Euro Elections. It was the second time that the Rock has been able to cast a vote for Euro MPs as part of the South West England and Gibraltar constituency. In the first elections in 2006 there was a high turn out on the Rock as Gibraltarians had won a hard fought battle to vote but the indications are that this year there was a lot of voter apathy.

In some ways this is hardly surprising. Gibraltarians are a sophisticated people politically but they were being asked to support parties that have no bearing on their day to day life. The key candidates were Tories, Labour and Lib Dems who do not exist as parties in Gibraltar although the GSLP and Liberals have links to the later two.

In the 2006 elections Gibraltarian Lyana Armstrong-Emery stood for the Greens. In this election Llanito Liberal Jonathan Stagnetto was a candidate for the Lib Dems but as the sixth candidate on the list had no chance of being elected. To make the Euro elections relevant to Gibraltarians either they should have their own seat or have candidates high on the list on all the major parties.

Ahead of last week’s polling the Progressive Democratic Party restated that its objective is to secure a separate MEP for Gibraltar. Until that happens the PDP says it considers that there is a democratic deficit to the detriment of the people of Gibraltar.

In a statement the PDP said: “There is no doubt that the MEPs from the three mainstream political parties, have served Gibraltar well. A vote for any of these is a vote for people who in the past have shown support for Gibraltar. The issue of course does not end there and Gibraltarians will have to judge the parties on their overall commitments to Gibraltar in areas such as sovereignty, self-determination or our defence on economic, environmental or social matters of importance within the European Union.”

“Additionally their attitude to Gibraltar having a separate MEP is important. None of the major parties, Conservative, Labour or Liberal Democrat have so far committed themselves to allocate a separate seat for Gibraltar.”

In the run-up to last Thursday’s election the PDP call on all three of the British parties to adopt that as official party policy. It noted Labour’s Glyn Ford has expressed his personal support for this but as yet it is not a Labour party commitment.

On Stagnetto the PDP observed: “Equally welcome is the inclusion by the Liberal Democrats of a Gibraltarian on their list. However given that seats are allocated to those at the top of the list only, the reality is that because he is at the bottom of the list Jonathan Stagnetto stands no real chance of being elected even if all Gibraltarians voted for him. It would have been different if he had been named second on the list. The conservatives have given firm and high profile commitments on sovereignty but have not pronounced themselves on the issue of a separate MEP for Gibraltar.”

In last Thursday’s Euro vote the Conservatives won 51.93 per cent of the Gibraltar vote followed in a distant second place by Labour on 18.53. The Lib Dems with Jonathan Stagnetto on the ticket polled just 17.71 per cent. The staggering statistic was that only 7,166 Gibraltarians or EU citizens opted to vote – around 35 per cent of the electorate (compared with 58 per cent in 2006) – well below the EU average. Gibraltar is now represented by three Conservatives, two UKIPs and one Lib Dem – the long serving Labour Euro MP, Glyn Ford, lost his seat.
Posted by SANCHO at 8:08 AM

With only 7,000 votes cast that puts Gib on a par with a small English village - which of course it is, except it isn't English.

In theory Gibraltar could be represented by MEP's who have never set foot in the place and have little or no knowledge of life or politics in Gibraltar.It seems rather undemocratic that under the present system Gibraltarians cannot represent Gibraltarians.
Tony Murphy

Tony will know that although Northern Ireland and the Republic of Ireland send their own Euro MPs to the parliament, once there, they co-operate on many issues and did long before 'peace' ever came to the six counties. One would think a Gibraltar Euro MP would have more in common with somebody representing Cádiz - Campo de Gibraltar - rather than SW England. Unfortunately Spain elects its Euro MPs on a national basis but if Gib and Spain could work together in Europe it could only be beneficial for both - or that's the theory.