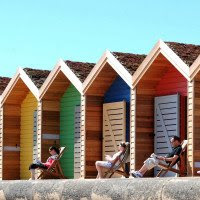 There are many good reasons for living in or visiting Britain but the weather isn’t one of them.

Hence my amusement when Britain actually has a really warm day the newspaper headlines shout – and the weather girls gloat – “We’re hotter than Spain today”. Indeed – shame about the other 364 days.

It is difficult to talk of Spanish weather because it’s such a large country with differing weather zones. Last Monday afternoon I called in to a bodega near Sevilla for a plate of fried fish and a glass of chilled Barbadillo white wine. It wasn’t hot by Sevilla standards but warm enough. I sat stunned watching a TV report, I think from La Rioja, where that morning there had been a deluge and JCBs had to be brought in to remove the feet deep hail stones from the streets. Cars had been washed away, houses flooded and there sat I slaking my thirst with a bottle of water.

The summers in Andalucía are hot but on the days when the thermometers really peak I have never read or heard in the media – it’s hotter than Athens or Rome today. Well we know it’s hotter than London but what about Timbuktu when we swelter in the high 40s?

I wish Britain many sunny, happy days. Yet you know full well if they should occur they’ll be national angst over heat stroke, jelly fish in the sea, overcrowding on the beaches, buckling lines on the railways, road tarmac melting – better to stay cold and damp – then for one day a year to be hotter than Spain… and shout it out loud!
Posted by SANCHO at 12:49 PM

Sitting at a table outside La Tasca in Jimena with several sun-starved Brits this morning, I got a call from a friend in Copenhagen who proceeded to tell me that she was in a heatwave there (all of 25º), which is why she remembered me! There is definitely something about living in Spain...

Summers in Andalucía are hot indeed, but have you noticed how the cool breezes of September come just in time to avoid total insanity? Anyway, I'd rather have Christmas lunch on the terrace than around a fireplace...

I must admit I am a traditionalist and for me Christmas should be crisp and cold - perhaps even snow. I once spent Christmas Day with friends in Cape Town and whilst the meal was traditional English/British I was horrified when we all then went to the beach.

I lived for 45 years in Britain and NEVER saw a white Christmas until a could of years ago. However driving back to England for Christmas last year we delayed by HEAVY SNOW north of Madrid