NOT A DOG’S CHANCE 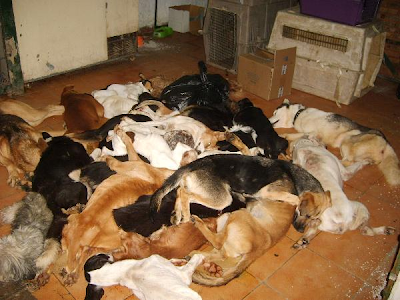 Last Friday ten animal protection societies gathered in Cádiz and condemned the lack of interest shown by town halls and other administrative bodies over the care of abandoned animals.

Before I continue I should draw the distinction between animal protection societies who seek to rescue, care for and seek homes for abandoned cats and dogs and private dog pounds who earn their money by taking these animals in, providing the minimal facilities then more often than not putting the poor creatures down.

The protection societies spoke out just 18 months after the closure of the Puerto Real dog pound for maltreating the animals in its charge. In a statement the societies denounced the fact that: “unfortunately today there are new private dog pounds, where the emphasis is on destroying the animals and the business element, and where in the majority of cases there are a lack of suitable living conditions and a lack of any adoption policy.”

The societies believe that in the majority of the dog pounds in the province many of the animals are kept in bad conditions, suffer from the excesses of cold and heat, do not have veterinary care – especially at weekends and if they are puppies they are condemned to death from many of the illnesses prevalent in the installations.

After the closure of El Refugio in Puerto Real in November 2007 because animals had been put down with a muscular paralysing drug without respecting the requirements of the law the 15 town halls using the animal pound relocated their animals to Rota, Jerez, Los Barrios and installations in Sevilla.

The president of the association of town halls of the Bay of Cádiz, Felipe Márquez, then promised that a “model” centre for caring for abandoned animals would be constructed on land by the cemetery in Chiclana but this has never been done.

The societies lamented: “All the town halls and political parties have chosen to look the other way and have shown no interest in knowing about the terrible conditions that exist is the majority of animal pounds.”

Of course in times of economic crisis politicians look to caring for humans (who have votes) rather than animals (who don’t). Nor has the status of animals in Spain been helped by the Catholic Church that for years told the people that cats and dogs had no rights as they didn’t have souls. Indeed the Spanish bishops recently caused outrage when they ran an advertising campaign complaining that the endangered Lynx had more protection than the unborn human foetus. One might ask whether clergy that sided with the fascists, protected the interests of the rich over the poor and abused children also had souls – but that is a debate for another day.

It used to be said that you could judge a society by how it cared for its old people. Perhaps we should now add – and for its animals either within the home or when abandoned.

My point entirely.
Posted by SANCHO at 6:34 AM