WE VOTED PARTIDO ANDALUCISTA NOT PSOE 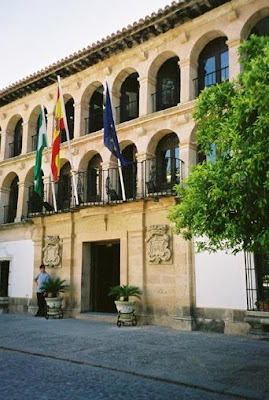 In the Andalucía town of Ronda the Partido Andalucista mayor, Antonio Marín, along with his party’s councillors have left the PA and become members of PSOE.

There was no surprise here. Previously he had courted the Partido Popular but as they didn’t seem keen to have him in their ranks he booted the centre right party out of his coalition and brought on board the centre left socialists instead.

As the PA is in coalition with PSOE it means little in the day-to-day governance of the municipality. However there is a wider issue here.

Voters (remember us?) elect their politicians based on their decisions on Election Day. A large number of people in Ronda rejected PSOE, PP, the IU and any other party on the ballot and chose the Partido Andalucista. Now they find they are totally unrepresented.

Several months ago a Republican senator in the USA decided he’d become a Democrat. The majority of people in his State voted Republican –they should have a Republican voice in Washington.

British MPs have occasionally switched parties turning a Conservative seat Liberal or whatever.

This is where politicians have lost the plot. They are elected to speak for us not to treat us with total contempt once they have gained office.

If any politician feels that the party he or she was voted in as a member of no longer meets their beliefs then they should resign in favour of reserve candidates or hold a by-election so that the voters can either return him or her in their new colours or choose another party.

Democracy is about voters not politicians.
Posted by SANCHO at 3:23 PM

Email ThisBlogThis!Share to TwitterShare to FacebookShare to Pinterest
Labels: democracy

The people of Chiclana rejected PSOE because of the corruption. Then the politicians broke ranks and we now have a PSOE led coalition in the town hall.

I couldn't agree more, but I suspect when the next election comes around the same mixed bag of people's representatives will be holding onto their jobs, and I can't imagine the PA getting in on their own, so Ronda is likely to become a PSOE vs PP battleground. Democracy is young in Spain, maybe we just need to give it more time [tongue in cheek]