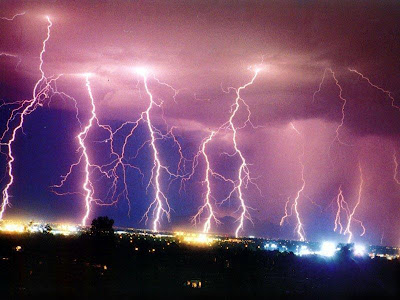 Before she left us my mother told my sister that when she died and got safely to wherever she was going she’d arrange a thunder clap to say all was o.k. As a woman of her word the afternoon she died she duly obliged with an impressive rumble.

Yesterday was the fifth anniversary of my mother’s death.

At around the time of her passing thunder boomed over my sister’s house.

My sister’s new puppy stared in to the living room as if somebody – a stranger - was there.

Now if you believed in such things….
Posted by SANCHO at 10:33 AM

Petwac. A Petwac is a Popultion of Events That Would Apper Coincidental. Word invented by Prof. Dawkins. Thus, 5th aniversary of Mama's death: you keep on bumping into peole with the same name, everybody you meet that day had a mother die the same day, you keep seeing a particular shade of violet she was devoted to, you bump into her great friend, you hear "her" song, you see her old car driven by, her cat dies at last, blah de blah de blah. Miracles?