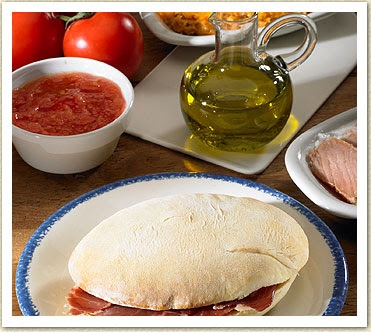 Yesterday I chewed the cud with my good friend Prospero. To be more accurate we chewed a mollete con aceite, jamón y tomate in the Bar Vecina – but same difference.

We talked of language. That in itself is a sign of our times. Twenty or thirty years ago we would have talked of sex, drugs and rock and roll – now we discuss the English and Spanish language.

Prospero, who amongst his many talents is a translator, was telling me that he’d been chatting with his colleagues on-line and apparently whilst translating from English to Spanish in Spain is taking a drop because of the economic crisis in Argentina it is on the up because they charge a lower price.

Now as Prospero is fluent in English, English American, Castellano and South American Spanish (he was born in Argentina) he was pointing out to his fellow translators the problems of say a Briton in Spain asking a Spanish translator in Argentina to work on a document as words would be different.

It was Churchill that said that Britain and the USA were two nations divided by a common language. The same is true of Spain and Latin America. However because of the cultural interaction between the zones in books, theatre, TV and cinema we normally have little difficulty communicating with our cousins across the pond.

Citizens of the USA talk of sidewalks (pavements), gas (petrol) and elevators (lifts). A bill in the USA is a bank note but in Britain it is an invoice – a biscuit in New York is a scone in London. If a Briton said fanny it would be a vulgar way of saying vagina but an American would mean buttocks. If a Briton could murder a fag – he or she would be desperate for a cigarette but in San Francisco it would mean you want to kill a homosexual.

The differences between Spain and Latin American are similar. A computer in Madrid is an ordenador but in Buenos Aires is a computadora. In Spain they talk of mantequilla (butter), aguacate (avocado) and albaricoque (apricot) but in Argentina, Chile, Paraguay and Uruguay they are manteca, palta and damasco.

The words coger (to take, to catch), pisar (to step on) and concha (seashell) are commonly used in Spain but are extremely vulgar in South America.

I remember a young presenter at a radio station in Benahavís telling me with glee that her aunt hand fallen whilst on a visit to Mexico and laying on her back called out using coger. In Spain that would have meant pull me up – in Mexico – err, have sex with me – apparently the passers-by did neither!
Posted by SANCHO at 9:57 AM

Your Benavis story reminds me of the cub reporter who filed a report about a woman in Pall Mall who had prostituted herself on the pavement. His editor called him in and suggested that he would get further and quicker up the ladder if he learned to recognize the difference between a fallen woman and one who had just slipped up.
The change of use of Coger to a f-word, instead of grab, was caused by Juan de Solis' sex starved sailors when they invaded Uruguay and were let loose on the local Indian population. It is still so in Argentina and Uruguay, but not in Chile.

Good cud that, Sancho (my turn next time). And good article as always. Here's another, more local example of language complications:
A good friend of mine, speaking excellent Spanish learned in Madrid longer ago than she's wish me to mention, approached the chemist in Jimena and said she had a 'gato hembra' that needed medication. The puzzled look on the by now gathered assistants and customers only elicited further insistence on the animal's strange gender.
Telling the story later she explained that she didn't know whether, locally, the female for 'gato' would have the same connotations as the female for 'pollo'. The chemist is still scratching his head and my friend can still be 'embarazada'...
(By the by, I was born in London and brung up in Argentina, though I did attend a series of very English schools there.)

Indeed Prospero I remember a woman many years ago who went in to a butcher’s in San Pedro and asked in a loud English accent whether the butcher had a polla. When he assured her that he did whilst the local women rolled around the shop in mirth she insisted she wanted a large one. Amidst more weeping and smacking of thighs by the female audience he suggested that in that case she should catch him first thing in the morning. This in my experience has only been equaled by a man who marched in to a bar with his wife also in San Pedro and ordered dos coños. The waiter dropped his tray in amazement!

Just in case there is anybody left who has not heard this (it is relevant I feel to today's blog):

Q. What is a person who speaks several languages?

Q. What is a person who speaks two languages?

Q. What is a person who speaks only one language?