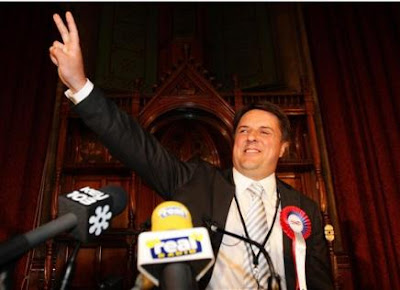 There was outrage in the UK after the far right BNP picked up district council and Euro MP seats.

There was an indignant snort as I left the polling booth on Sunday after a fellow voter spotted a Falange voting list amongst the numerous parties on offer in Spain.

Of course the difference is that the BNP scored some success whilst the Falange secured just a fistful of votes.

I carry no candle for extremists in politics be they on the right or the left. For me the television shots of hate filled protestors outside Manchester town hall preventing the BNP leader, Nick Griffin, from entering was just as troubling as his party’s success within the same building.

However I would still argue that the participation of these parties is good for democracy.

For those of us in the middle ground it is a strong reminder that we treat democracy with disinterest or disdain at our peril. To ensure the merchants of hate and prejudice stay solely on the fringes we have to make sure that the main body politic remains healthy and meets the diverse needs of our people.

The BNP voters didn’t come from thin air. A significant proportion normally support the Labour Party so it is a sobering thought that this party of the centre-left is home to those who would vent their anger and frustration by voting for fascists.

Equally the Falange was the party of Franco. All political parties are a broad church and the centre right Partido Popular would be the normal home of those on the far right. As the PP is currently in the ascendant there is little cause to vote Falange…but that could change.

I sometimes watch Fox News to remind myself why I don’t want to be an American. There is a sector of US politicians who believe that democracy is only valid as long as it elects parties that agree with them. They argue that being a democratic nation and electing politicians who do not agree with the Republican or US objectives must somehow be fundamentally undemocratic.

Not so. The election of the BNP and the standing of the Falange is good for democracy because it reminds us of what is at stake and also gives us the opportunity at future ballots to reject basically evil creeds. If they should succeed it is because we and the centre-based political parties have failed - for that there is a heavy price to pay. 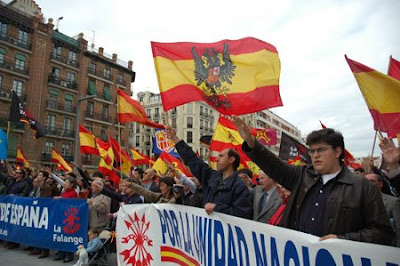 Extremists are always in our midst - at least if they are members of the BNP we know who and where they are.

The anti BNP protestors were out again in Westminster yesterday. We must reject the fascists of the right and the left!