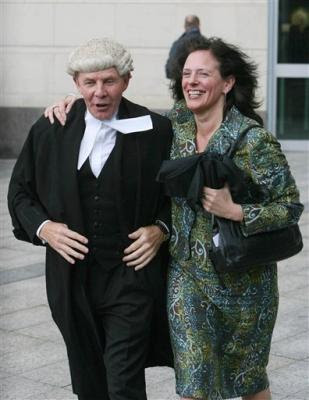 On June 5 I blogged here about the case of the Northern editor of the Dublin-based Sunday Tribune, Suzanne Breen, and asked you to sign a petition in her support.

She was the subject of a legal case brought by the Chief Constable of the Police Service of Northern Ireland, Sir Hugh Orde, who wanted information on the murders of two British soldiers in March.

Suzanne Breen had received the Real IRA’s claim of responsibility for shooting dead Sappers Patrick Azimkar, 21, from London, and Mark Quinsey, 23, from Birmingham, at the gates of Massereene Army Base in Antrim.

The police wanted the court to force Breen to reveal her sources. Not only does this go against journalistic practice as a source is always protected but to have revealed the name or names would have endangered Breen’s life. Indeed had she done so it would have made many journalists’ lives more dangerous as it could have given suspicion to them also being forced to divulge sacrosanct information in the future.

Breen was adamant that she would never reveal her sources. Had she been ordered to do so by the court and refused she would have faced up to five years in prison.

She told the judge that protection of sources was the linchpin of investigative journalism and that is was the police’s job to investigate crime - not the media’s.

However there is another aspect to this case. The police and security services brought their action under the terrorism legislation. This meant that the lawyers and police spoke to the Belfast Recorder Tom Burgess in secret. Breen’s legal team made her case in public and were not party to what the police were saying and could not refute any claims made by them. This simply flies in the face of justice as we know it.

In the event Belfast Recorder Tom Burgess acknowledged that there was public interest in catching the killers but said the journalist’s right to life outweighs that.

The victory has been hailed as a victory for journalists. It is.

It is also an important victory for the British legal system where a judge refused to be bullied by the police and security services in to ruling in their favour!

http://tiltingatwindmillsblog.blogspot.com/2009/06/suzanne-breen-journalist-facing-jail.html
Posted by SANCHO at 11:20 AM

The anti terror laws introduced over the past 5 to 6 years give the police an unprecedented level of power.Your description of how the police presented their case is chilling.They can say anything they like,make any accusation,in the knowledge that not only can you not refute it,but you cannot even see what, if any evidence there is against you.This is what you expect from a repressive regime not from a supposedly open democracy.This comes in the same week that it was announced that Britains first criminal trial(not terrorist related) without a jury is to take place soon.The official reason given is that there are serious fears of jury tampering.Sounds like the sort of excuse that could be used again and again.

Good news that the Journalist didn't have to divulge her sources; the poor woman would have been shot long before she opened her mouth.