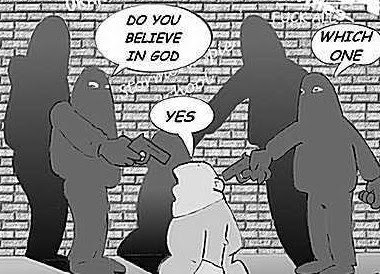 I am currently reading Indian Summer by Alex Von Tunzelmann in which she details the role of the Mountbattens in the partitioning of India to form Pakistan and the hand over of power in 1947. What struck me is the details given on how that partition was carried out strictly on religious grounds without any reference to the realities of local life with the then Moslem Eastern Pakistan (now Bangladesh) being deliberately made unviable in the belief that it would be forced to reunite with Hindu India.

Now I have often mentioned in this blog that I was brought up in Britain in the 50s and 60s as a Catholic in what was then a fundamentally Protestant country. I certainly remember taking part in Corpus Christi processions through the streets of my home town. Now whilst these are common yearly events in Spain, and wider Catholic Europe, it must have made a curious sight for my fellow Londoners. However in all those years I can truly say that I was never made aware of any anti-Catholic feeling. Indeed I remember when a divorcee moved in to our street accompanied by much nudge-nudging and sly winks. The woman was in all probability the innocent, hurt party but she was - the divorcee. Yet although we were the only Catholic family in the street and all marched off to mass on Sunday mornings, high days and holidays, never a word was said.

It was only when I moved to Dublin in the early 1970s that for the first time in my life religion became an issue. I would be asked straight out in the office was I Catholic or Protestant – a topic that had never been raised in my four previous jobs or whilst I was in the Royal Auxiliary Air Force. I soon learned that whilst Dublin is the capital of the Catholic Republic of Ireland, such companies as Guinness, Boland’s or Gouldings were Protestant concerns, where leading with the right rather than the left foot would help in your climb up the promotional ladder. Most of the people I worked with were Catholics but there were some Protestants who were clients who believed that because I was English I must be one of them.

By then of course I wasn’t one of anything because although born a Catholic (and hence according to the Church always a Catholic) I was non-practicing and was as I am today an agnostic. It was all rather bemusing and amusing for more often than not in London it had been presumed, especially in the media world, that I was Jewish – but that’s another story.
Posted by SANCHO at 9:28 AM

Shalom, my friend. Or is it Salaam?
Having been born a Catholic too, and raised in a country and a time when there was nothing but 'Catholicism' (inverted commas on purpose), Protestants didn't exist in my early years. Not until I went to a supposedly very good school run by Protestant clergy (the thought of it!). So, apropos the headline of yet another excellent article of yours, I was confused to the point of attending Catholic Mass (in the gym because it was bigger) and then running over to sing in the Protestant choir, whose music I for some reason preferred.
But then, the Jewish among us, who of necessity (military dictatorship) kept a very low profile, began demanding to quietly attend a newly established, and very hidden, synagogue not far from the school. This, naturally, had to be on the Sabbath and I had nothing much to do on a Saturday, so off I went with them. Fortunately my voice began to break about then, or I might have been asked to study for Cantor, but that's another story. The same might have happened if I had had some reason to also attend a mosque, but there weren't many of them around, as far as I know.
My excursions into Voodoo in Haiti, Santería in Miami and other such explorations of youth elicited nothing other than a sense of rhythm and a propensity to collect drums.
Am I confused now? Not at all. I am, like yourself, an agnostic, though I can't wait to see what if anything happens at the Pearly Gates...

The cartoon reminds me of a joke I heard many years ago during the troubles in N Ireland. A man turned a corner on a street in Belfast and on one side was a hooded IRA gunman and on the other a hooded Protestant gunman. They both called to him - what religion are you? To be safe he replied - Jewish! So they both shot him.