PIE IN THE SKY 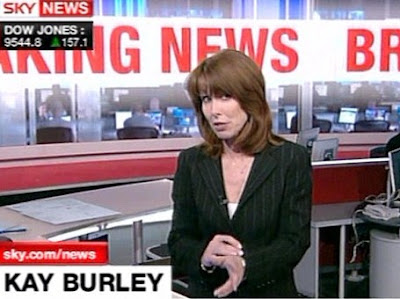 I never wrote about Michael Jackson when he was alive – if I had I doubt whether it would have been positive.

Sticking to the age old adage - never speak ill of the dead - I will not write about him now.

Yet I will talk of his passing and more specifically Sky News.

When I tuned in to Sky News on Friday – at around 6.00 Spanish time – his death was deemed as breaking news.

Again on Friday evening –it was still breaking news.

In between times as far as Sky was concerned there was no other news.

There were no demonstrations in Iran.

No atrocities in Iraq.

No attacks in Afghanistan.

No train crash in Madrid.

Wimbledon had been forgotten.

Indeed apart from Michael Jackson dying all was right with the world.

Now even Michael Jackson can only die once. However if all it takes for all our problems to disappear is for a pop or film star to fall off this mortal coil – then there’s no shortage of candidates.

Indeed we could start the process with a Sky News newsreader!

(As I tuned in to Sky News this morning it was still breaking news. Only now the Prima Dona has been flown to Los Angeles and posted outside the coroner’s office. As 23.00 LA time passed she told us with due gravitas that the body of Michael Jackson was still inside and the family only had a short time that night to have it collected. She then interviewed a member of the paparazzi who said he had blue prints of the building – a helicopter in the air – and when that body moved he’d know about it. An official from the coroner’s office then emerged – told us that Michael Jackson’s remains had been taken to another location just after 21.00 – several hours earlier - and when asked “was it in secret?” replied: “no – in a van”. Laugh I could have cried!)
Posted by SANCHO at 10:41 AM

Michael Jackson, who he?

In life Michael Jackson was a seriously flawed human and a brilliant performer.

In death a big earner for the record companies and material for the news hungry media.

I doubt whether reality enters in to either.

Darren has said it all!
MD